Jon Rahm throws his golf club and it very nearly ends up striking a lady carrying a microphone. 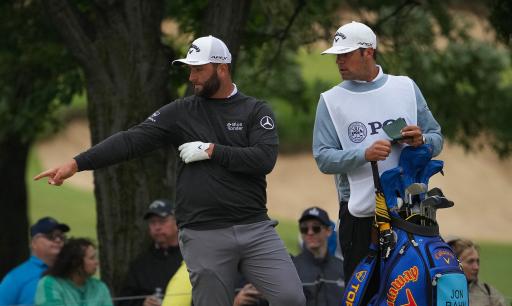 Footage has emerged of Jon Rahm hurling his golf club towards his bag and it very nearly striking a lady who was carrying a microphone in the Spaniard's group at the Memorial Tournament on day two.

Rahm sent his approach shot onto the green at the par-4 11th but it was some way left of the pin.

He was understandably disappointed with the result of his wedge shot.

"Oh my god amazing line there, Jon.. that is incredible," he muttered to himself while the ball was in the air.

Rahm then launched his wedge towards his bag and the club then bounced towards the lady who was holding a microphone across the fairway during the PGA Tour's LIVE Featured Groups coverage.

The World No.2 immediately apologised by saying "Sorry, sorry, sorry."

The lady seemed to take it in her stride as she laughed it off: "It's okay."

On the LIV tour, you get a salary, so you don't need to be as competitive, and won't get as mad. Might be good for Rahm. pic.twitter.com/WjQrh6muOU

Rahm is having an indifferent week at the Memorial Tournament, especially after incredibly shanking his ball.

He made the cut but he finds himself well out of contention heading into Sunday.

Rahm held a six-shot lead after 54 holes in this tournament last year, but he was forced to withdraw after testing positive for Covid.

Next Page: Jon Rahm shanks a shot at the Memorial and then sees the funny side of it