Brooks Koepka and Jena Sims enjoyed some downtime at the Boston Celtics vs Miami Heat game last night as they prepare to get married. 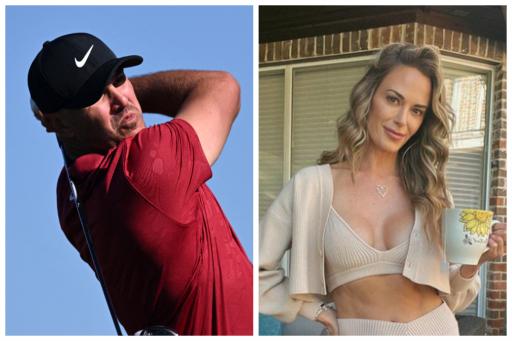 Brooks Koepka may not be enjoying his best time on the PGA Tour, but he certainly has much to look forward to off the course.

He and his fiancée Jena Sims took some time away from the golf course and went to the NBA last night where the Boston Celtics played Miami Heat at the FTX Arena in Miami.

The pair were not the only celebrities in the crowd in Florida. Alex Rodriguez, Paul Pogba, Jimmy Buffett and Xavien Howard also watched the Celtics take a 3-2 lead in the Eastern Conference title series.

The happy couple is currently happier than ever as their wedding approaches. They got engaged last year and Sims has recently posted more content about her bachelorette party.

On May 17, Sims posted pictures on her Instagram page of her and her friends in sunny Aruba. It certainly looked like an incredible and exotic location to celebrate getting married.

It is unclear when Koepka and Sims are going to tie the knot. In the style of Dustin Johnson and Paulina Gretzky, they have been dropping subtle hints week by week.

Perhaps Koepka's mind is on other things away from the course because, on the course, he has been a shadow of his superb four-time major winning self.

The 31-year-old has made two top-10s in 14 events in 2022 and he has missed six cuts. He didn't make the weekend at The Masters and he came tied 55th at the US PGA Championship last week.

It isn't normal for the former World No.1 to be showing this sort of form on the PGA Tour, but just as he did at the Waste Management Phoenix Open in 2021, you can never rule out a win from the blue.

Next Page: Did John Daly just fire a cheap shot at Tiger Woods in the US PGA Championship?