Brooks Koepka celebrated winning The Match over Bryson DeChambeau by attending a basketball match in the presence of greatness. 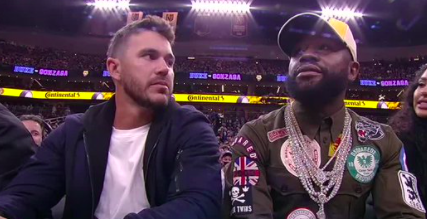 Brooks Koepka certainly had an enjoyable Thanksgiving weekend. He put his feud with Bryson DeChambeau to bed with a convincing 4&3 victory at The Wynn Golf Club in Las Vegas.

He said he wanted to 'spank' DeChambeau and this is certainly what he did. The big-hitting former US Open champion didn't win a hole in a disappointing display.

Phil Mickelson, who was in the commentary booth with NBA legend Charles Barkley, predicted a DeChambeau win, but Koepka had other plans and claimed victory in his first appearance in the fifth edition of The Match.

After tasting victory, which he has done eight times on the PGA Tour, Koepka attended the NCAA basketball showdown between the Duke Blue Devils and Gonzaga Bulldogs.

But Koepka was not sat alone at the T-Mobile Arena in Las Vegas. He was sat with none other than pound-for-pound boxing legend Floyd 'Money' Mayweather.

Mayweather has graced the famous strip in Nevada many times, fighting the best fighters of his generation and beating them all. He lives in Las Vegas too.

Koepka has previously told us that he can reach Jack Nicklaus' major-winning record of 18, which Tiger Woods has chased down throughout his career.

RELATED: GOLF RULES: ARE YOU ALLOWED TO BALANCE ON ONE FOOT THEN WALK THROUGH THE STROKE?

With two USPGA and two US Open trophies to his name, the 31-year-old still has much to do to achieve greatness in the game, the same sort of greatness that Mayweather achieved in his career.

Maybe Floyd wants to pursue a new golf career in his boxing afterlife? If he does, he is certainly picking the brains of the right person in Koepka.