Has Max Homa, king of roasts, just delivered his BEST ONE yet with this zinger?!

The 31-year-old PGA Tour pro has become a must-follow on social media and it's easy to see why... 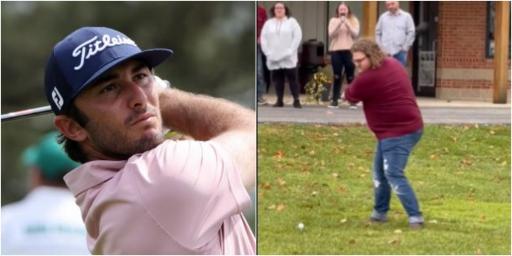 Max Homa is a professional roaster who occasionally partakes in golf tournaments on the PGA Tour and worldwide.

At least, that is what he should be with the amount of zingers he sends over the Internet. And this one could be his best roast yet.

If you're unfamiliar with Homa, he is a 31-year-old pro who has won three times on the PGA Tour.

He's become one of your must follows on social media as he likes to make fun of swings sent into him in a comedy roast fashion.

But this one, in our view, is sensational. A two-for-one zinger. Boom. Roasted.

I hope he doesn’t get ur jeans… https://t.co/a8heZJvRdC

Joel Dahmen's caddie Geno Bonnalie pointed out this was his best one yet, as did thousands of fans.

We wonder how long Homa takes to think up these roasts before pressing send.

Homa's most recent victory came at the 2021 Fortinet Championship with a one-stroke victory over Maverick McNealy.

Before that, he won the Genesis Invitational in February with a playoff victory over Tony Finau.

Homa won his first title on the PGA Tour in 2019 at the Wells Fargo Championship.

In 2017 he Tweeted: "Had a few caddies hit me up recently hoping to team up. They heard they usually get weekends off which is apparently a great selling point."

Let's take a look at some of his best roasts:

It’s a good thing ur a bartender so u can pour a nice stiff drink after the round. Or before. Before may be better https://t.co/W7IuUOpojV

Even if I tried to save this video on my phone I think it’d cause a virus https://t.co/YQckM9GDUS

Ya I know she called me too https://t.co/pFtM3rPi4T

U have so much room for improvement! Some may say u can really only get better! https://t.co/DkKDn2AAkg