Golf rules: Are you allowed to BALANCE on one foot then walk through the stroke?

This is a well executed shot, but is it legal under the Rules of Golf? 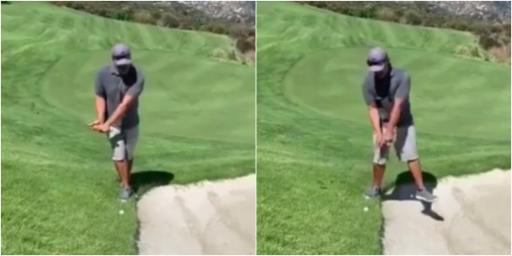 Sometimes in golf we are presented with nearly impossible situations and we are left yearning for that ice cold beer in the clubhouse.

This one is pretty interesting. It shows a player faced with a tough stance next to a green side bunker. In fact, he has no stance and is left having to balance with one foot. As he comes into impact he uses his momentum to essentially walk through the shot.

That's a well executed shot in fairness and pretty creative. But is it permissible under the Rules of Golf? Well, the team over at @golfrules_questions have you covered. This instance comes under Rule 10.1 under the definition of stroke.

a. Fairly Striking the Ball

b. Anchoring the Club

In making a stroke, the player must not anchor the club, either:

If the player's club, gripping hand or forearm merely touches his or her body or clothing during the stroke, without being held against the body, there is no breach of this Rule.

For the purposes of this Rule, "forearm" means the part of the arm below the elbow joint and includes the wrist.