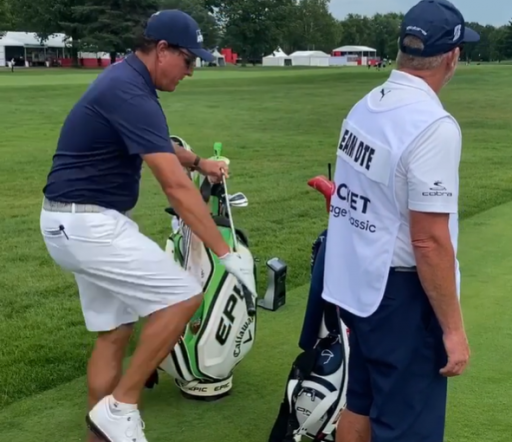 Phil Mickelson was caught on camera trying to snap Bryson DeChambeau's 8-iron over his knee during the Rocket Mortgage Classic Pro-Am on Wednesday. Okay, it was a prank but it was still pretty funny!

Mickelson, who has 1.2 million followers on Instagram, posted a video of him bending Bryson's iron over his knee while his compatriot let rip with driver off the tee.

"Hopefully there's a lot of 8 irons for Bryson this week at the Rocket Mortgage Classic, and next Tuesday's Match," Mickelson captioned his video post on Instagram.

As Mickelson mentions, he will be competing against DeChambeau in the next series of the Match on Tuesday, with Mickelson teaming up with Tom Brady and DeChambeau alongside Aaron Rodgers.

DeChambeau is the defending champion at this week's Rocket Mortgage Classic following his three-stroke victory 12 months ago.

Check out how golf fans reacted to the video below:

"Phil is an entire mood."

"People that watch golf know that Bryson plays with graphite (and not steel) shafts... staged goof! Funny, but staged."

"His 8-iron bombs are something when he's on."

"Brave move. Bryson could punch him in the face and they'd be even."

"Can I get a mulligan?! at the end proper tickled me."

"That is stone cold Phil."

"Phil out there flexing, pun intended."