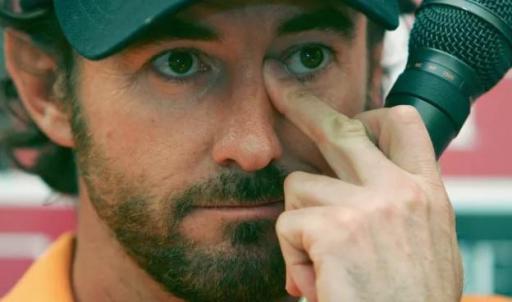 Mark Hensby received an incredible 10-shot penalty on day one of the Palmetto Championship on Thursday after falling foul of the PGA Tour's 'One Ball' Rule.

Hensby, who was teeing up this week in just his second PGA Tour event in three and half years, found the penalty area on the 4th hole and then took his drop en route to making a bogey.

Four holes later, however, the 49-year-old Australian realised there was a dot on his golf ball that he had never seen before.

After speaking with his caddie and playing partners, Hensby discovered the ball was a low-spin Pro V1 and not the model of the golf ball he currently uses.

Under the PGA Tour's Local Rule G-4 One Ball Rule, which means a player must use the same make and model of golf ball during a round of golf, Hensby received a two-shot penalty for each hole that he was playing the ball on.

The mistake was later cleared up as Hensby realised he had picked up one of playing partner Pat Perez's golf balls on the practice putting green.

Hensby went on to card a round of 13-over 84, and he would go on to withdraw from the tournament on Friday.

"I asked my caddie, ‘Hey what's this dot on the ball? I've never noticed this before; did they do something with the new pro V1?’" Hensby told PGATour.com

"And he didn’t know, so I asked my playing partners and they were like, ‘That's a low spin ball.’ Now I don't use this ball, so there was a lot of confusion where it came from – none of my others had the dot – but we knew I had played the wrong ball."

He added: "Somehow I picked up one of Pat’s balls and he ended up with one of mine. I only found this out because Titleist wanted to get to the bottom of it. I thought they had a wrong ball in the sleeve that I had.

"If you look at both balls it's hard to know the difference,” he continued. “It's not like one is black and one is red. They're both black, but one has a small dot on it and one doesn't. Unfortunately, I didn't notice that. I’m glad he didn’t use mine."

While a one-time winner at the 2004 John Deere Classic, Hensby is sadly best remembered for being suspended by the PGA Tour for 12 months as a result of failing to complete a urine test at the 2017 Sanderson Farms - READ HERE