Bryson DeChambeau sent his best wishes to American football legend Tom Brady who hung up his boots earlier this week. 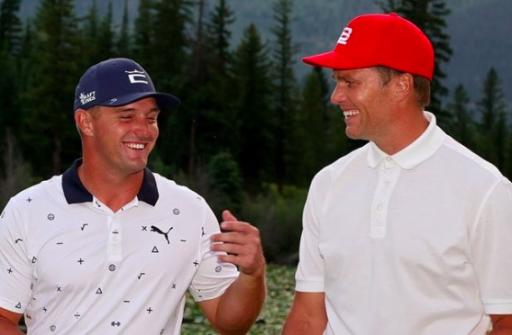 Bryson DeChambeau was one of many sportsmen to send their best wishes to Tom Brady who this week hung up his boots from American football.

DeChambeau was lucky enough to share a round with Brady when the former US Open champion teamed up with Aaron Rodgers against him and Phil Mickelson in The Match.

Like Brady, Rodgers is also an NFL quarterback and the two pairs shared a match full of camaraderie and great golf at The Reserve Golf Course at Moonlight Basin in Big Sky, Montana.

It was the fourth edition of The Match which Brady has competed in twice. DeChambeau and Rodgers triumphed 3&2 on this occasion.

"Tom is the GOAT. It was such an honour to compete against him in Match IV. He has been an inspiration for so many across all sports and I wish Tom and his family nothing but the best. Congratulations @tombrady on such an amazing career. Enjoy this next chapter!"

DeChambeau left this message on his Instagram page along with a picture of the pair during The Match. Brady's legacy on NFL is certainly not lost on the 28-year-old.

Brady, 44, reportedly has a handicap of 8 when he plays in his spare time, so he'll no doubt work on getting this mark cut now that he is retired.

NEXT PAGE: LEE WESTWOOD SAYS HE CAN'T SPEAK ANY FURTHER ABOUT A SAUDI GOLF SUPER LEAGUE