Bryson DeChambeau says he doesn't want to be controversial anymore

Bryson DeChambeau says he doesn't want to be a dividing figure anymore on the PGA Tour as he looks to turn a page on his life. 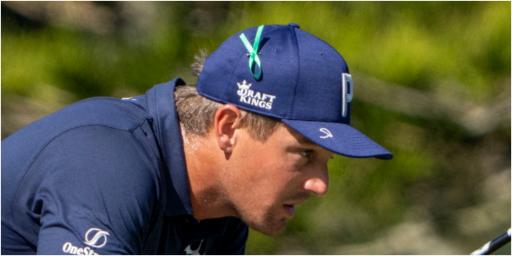 Bryson DeChambeau says he "doesn't want to be a controversial" figure anymore ahead of the Saudi International.

The 28-year-old made the comments when speaking to the media ahead of the controversial tournament scheduled for next month.

He was one of several leading PGA Tour figures who needed approval by tour bosses to play in the tournament.

Going forward, players who participate in this tournament are now expected to commit to the AT&T Pebble Beach Pro-Am.

He cited that he didn't want to detract from future stars and feels it is too invasive.

"I've had struggles in the past with different numerous things that have gone on, but I'm continuing to learn and grow and respond in ways that help the game of golf out.

"That's honestly all I want. I don't want to be a super-controversial figure, I just want to be someone that people can look up to and aspire to be like, or inspire them to work harder."

DeChambeau made bold claims ahead of the last Masters where he declared his length meant that it was more akin to a par 67.

What followed was a humbling few days and a T34 finish for DeChambeau and it left him wanting to change perspective.

"Everything was so heightened and then sometimes the let-downs were super difficult.

"It became a lot on a human being and it's amazing what people can do when they tell you you're this or that all the time when you know it's not true personally in the background.

"It becomes difficult at times, but as time goes on, you realise what are you doing this for, why are you doing it and how can you continue to improve in that quest for inspiring the next generation.

"Chris Pratt (an actor) helped me out at a really difficult time for me. He said, play this fictional character for a while. I know you're not happy, you're in a very difficult spot, but act like you're acting for a little bit and as time has gone on, that's gone away and I've become myself again."

DeChambeau was forced out of the Sony Open with a sore wrist as Hideki Matsuyama claimed his eighth PGA Tour win in a play-off.

But when he did play in Hawaii at the Tournament of Champions he was wearing a more traditional golf hat instead of his flat cap.

He said of that:

"I feel like I'm turning a bit of a page in my life, in my chapter and in my book.

"As I've always said, I'm always evolving and changing and growing and adapting.

"It's just another one of those things. I don't know if it will ever be a thing or stay or it pops up randomly, sometimes randomly with the normal driver cap.

"It's going to be one that is just going to keep you guys on edge, I guess. It just depends on what I feel like and what I'm comfortable with that week."