Joel Dahmen decided to follow the diet of a "pro athlete" by asking his caddie Geno Bonnalie for a hot dog moments before teeing off. Hilarity ensued. 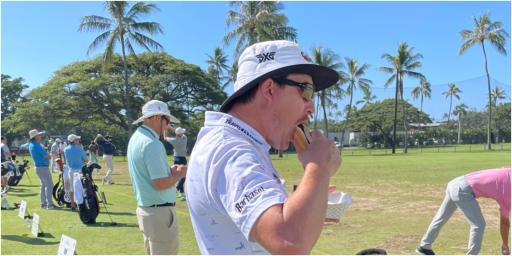 Joel Dahmen, the PGA Tour professional, appears to have a different approach to others with his diet.

He reportedly sent his caddie to stand in line and grab him a nice hot dog before he pegged it up in round one of the Sony Open.

Usually, when you think of PGA Tour players at the top of their game they will talk of their rigorous diets and training schedules.

We've heard the stories of Tiger Woods being up at 4am and stretching for a few hours before hitting the gym and then the range.

But Dahmen? Just a hot dog with a nice dollop of ketchup or mustard. That'll do nicely.

His caddie Geno Bonnalie decided to capture the hilarity on video, detailing himself standing in line waiting:

Of course, he decides to take aim at his boss by describing him as a "pro athlete".

Bonnalie decided to document his progress.

And even at the turn it appears that the hot dog didn't really do the trick so Dahmen, 34, opted for a Mountain Dew for another refreshment.

He said it's fitting that the @PGATOUR listed him as a sleeper, cause now he needs a nap

Apparently, Dahmen told Bonnalie that it's "fitting" the PGA Tour describes him as a "sleeper" because after eating it he needed a nap.

The hilarity for Dahmen and Bonnalie reportedly knows no bounds.

As they were grabbing a ride to the Tournament of Champions last week Dahmen was mistaken for a patron.

Bonnalie also caught the moment on film with the driver telling him to get there early to grab a nice seat on the 18th green.

Unfortunately Dahmen ended up missing the cut at the Sony Open in Hawaii.

"Try to get to hole 18 an hour early to get a good seat"@Sentry_TOC #SentryTOC pic.twitter.com/ei77IZQ1iJ