Abraham Ancer posts a video of a cheeky monkey on the putting green at Mayakoba. 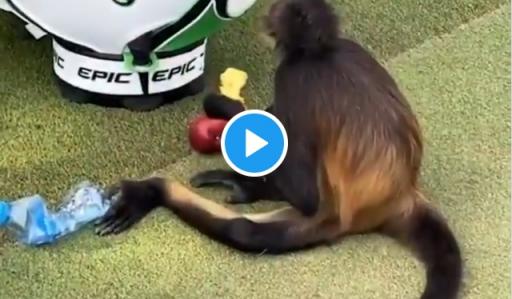 Abraham Ancer has posted a hilarious video of a cheeky monkey eating an apple by Danny Willett's golf bag on the practice putting green ahead of this week's World Wide Technology Championship at Mayakoba on the PGA Tour.

Ancer will be hoping to impress this week as he plays in front of his adoring home Mexican fans, while Willett will be looking to land a second win in four starts following his recent Alfred Dunhill Links Championship victory at St Andrews last month.

Check out the hilarious video, which was first posted on Ancer's social media earlier today and then shared by the PGA Tour.

Texas Asst Coach Jeff Banks Fell in Love With a Stripper Named "Pole Assassin" & Took Her and Her Monkey Gia Out of The Game; The Monkey Bit a Kid on Halloween & Now Ms. Assassin and Banks' Love Story Has Been Revealed (Pole Dancing-Jerry Springer Vids) https://t.co/mHYsuoYToV pic.twitter.com/8TWzHviyZf

Several comments off the back of the post have read: "Don't let Pole Assassin see this."

Others wrote: "Is this a shot at college football?"

Their posts are in relation to a sports story going viral this week involving American Football coach Jeff Banks, who is currently special teams coordinator at the University of Texas.

Allegedly his partner's monkey bit a trick-or-treater on Sunday night.

Banks' girlfriend is a stripper and goes by the name of Pole Assassin.