Bryson DeChambeau vs Brooks Koepka: Little kids get ready for The Match!

Brooks vs Bryson may be days away, but these little kids are already ready for The Match! 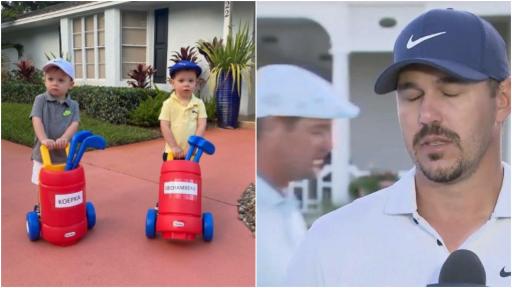 Bryson DeChambeau and Brooks Koepka will lock horns in The Match on November 26, but two little golfing fanatics are wishing it was tomorrow.

We have seen hundreds of golfing Halloween snaps in recent days, but this one below is definitely one of our favourites!

The post was shared on Instagram via @court123087 of two juniors posing with their plastic golf clubs with name tags on the front.

One of them was sporting Koepka's Nike Golf gear, while the other wore DeChambeau's PUMA apparel.

Koepka wrote on the post: "Even nailed the look Bryson DeChambeau will have on November 26."

RELATED: HOW TO WATCH THE MATCH BETWEEN BROOKS AND BRYSON ON NOVEMBER 26

Koepka and DeChambeau will battle each other in the fifth edition of 'The Match' in Las Vegas on Friday November 26.

DeChambeau and Koepka have been locked in a war of words the past couple of seasons on the PGA Tour, fuelled further earlier this season when Koepka rolled his eyes as DeChambeau walked past him during a post-round interview at the US PGA Championship.

The pair appeared to settle their differences at the Ryder Cup four weeks ago though, as they teamed up to help United States thrash Europe by a record 19-9 scoreline at Whistling Straits.

DeChambeau and Koepka did not play together in the foursomes or fourballs, but they did exchange a hug in the post-Ryder Cup press conference, and they were also seen shaking hands on the range several times during the week.

NEXT PAGE: GOLF TROLLEY ENDS UP IN THE LAKE DURING COLLEGE GOLF EVENT