Bryson DeChambeau has "no expectations" as he makes his long-awaited return to the PGA Tour at this week's WGC Match Play. 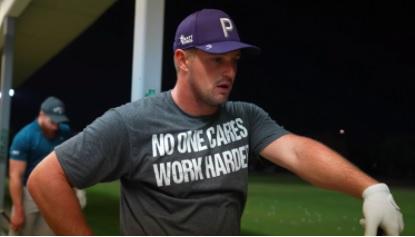 Bryson DeChambeau admits he has "no expectations" as he makes his long-awaited return to the PGA Tour following injury that has sidelined him since the Saudi International in early February.

DeChambeau was ruled out of competitive action on Tour as a result of injuring his hand while playing table tennis, according to reports.

However, DeChambeau had been seen in excruciating pain when missing the cut at the Farmers Insurance Open a week prior to his trip over to Saudi Arabia, which saw him withdraw after the first round.

DeChambeau, who may still require surgery on his injured hand, is giving things a go at this week's WGC Match Play in Austin where he faces England's Richard Bland in today's first round of matches.

The big-hitting American will then face England's Lee Westwood on Thursday and his US compatriot Talor Gooch on Friday.

Related: Bryson DeChambeau's epic struggle to get a volunteer to move out of the way

DeChambeau, who has now slipped to 13th in the world rankings, will only progress into the knockout stages on the weekend should he win his group.

But judging by DeChambeau's comments heading into this week, we probably should not hold too much hope that he will reach the last 16.

"No expectations, a great week is being here," DeChambeau told Golf Channel.

"People are going to say it [the injuries] is off of the speed training and all that and, sure, some of the things have been a part of that, just abuse and working really, really hard.

"At the same time, I wouldn't have traded it for anything. I've learned so much about my body as time has gone on and learned how to manage things and how important rest is."

DeChambeau also admits he will be easing off the gas until he reaches the first tee at Augusta National for the year's first major at The Masters in two weeks' time.

"I won't be able to go at it until probably Augusta time."

Next Page: How will Bryson DeChambeau get on against Richard Bland and Lee Westwood this week?