Adam Scott decided to have a bit of a joke during his practise round at Austin Country Club with Dustin Johnson. 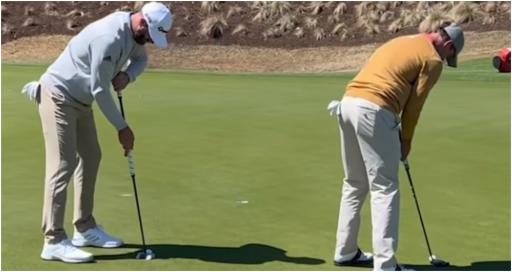 Adam Scott is playing the WGC Match Play for the first time since 2016 in a "tune up" for The Masters.

The decision for him to play here represents a big change in his preparation in the run up to Augusta National.

"Well, they're all tough matches, all major champions," Scott told the media in his press conference ahead of his first round match.

"Even if they weren't -- there aren't easy groups here, and I expect every match to be very difficult.

"And playing well, it's going to come down to the right shot at the right time for someone."

Quite a few high-profile players have decided to skip this event in favour of getting ready for the first major of the year.

Rory McIlroy has decided not to play. Newly crowned Players winner Cameron Smith is also sitting it out, as is Valspar Championship winner Sam Burns.

Scott continued: "Well, I think it's just something different for us. It's not a regular event, and you get the opportunity to kind of get a result every day. So that's fun.

"Even if you don't win the tournament, you might win three or four or five matches this week, and winning seems fun, so I think that's what's cool or different about it.

"You know, also depending on where your game is at and everything, you can really use this week as a good way to test yourself, being a little more aggressive.

"It doesn't really matter if you mess one hole up. You can kind of test where your game is at by being quite aggressive out there."

Scott was also filmed having a bit of a laugh with Dustin Johnson during their practise round ahead of the first round of matches.

They swapped putters and both drained putts at the same time. It's interesting to note that Scott is still wearing that beige jumper.

Scott, 48, decided to wear the jumper during all four days' play at Tiger Woods' Genesis Invitational at Riviera Country Club in February.

Is there something about this jumper? It caused a bit of a stir at the time, thought Scott didn't seem all too bothered by it.

When asked about it, Scott said: "Don't know what all the fuss is about. I might just wear it every day now."