Collin Morikawa faced the media ahead of the WGC Match Play at Austin Country Club and spoke about his putting problems. 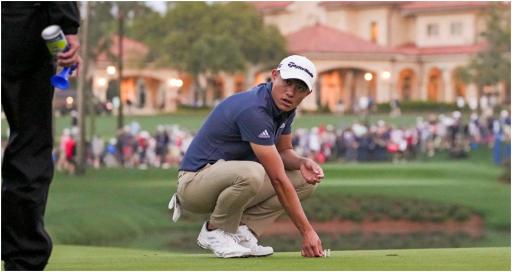 Morikawa heads into the WGC Match Play at Austin Country Club also struggling on the greens.

Of course, he was on the rough end of the draw at The Players and missed the cut, but he hasn't been rolling it as we know he can on the PGA Tour.

He's just ahead of Alex Noren in the putting department. That being said, he's only played in six events.

Still, Morikawa has lofty goals. And don't we know it. He has a chance to topple Jon Rahm as the World No. 1 should he win this weekend.

Rahm was asked about his putting woes. Again. And he's tired off being asked about it. "It's not as bad as it looks," Rahm said, adding he was not worried about it.

Morikawa was asked directly what could knock him out of his "funk" with the putter. Well, Morikawa doesn't view it as a funk.

"Yeah, you put it as a funk; I put it as a learning experience. What's weird about the past couple weeks from Players and Valspar is that I felt some of the best golf I had felt warming up and getting ready for the tournament," he said.

"But then there are just like little pieces that when I actually tee it up on Thursday that I'm missing from when I compare it to a really good round or a really good tournament.

"It's so frustrating because I feel like I can hit all those shots but then they're just not put together.

"I wouldn't say it's like a little funk. For me it's just making sure I wake up and realize, okay, I can't take anything for granted out here.

"I have done that in the past, and I hate myself for doing that, but sometimes -- this is a little different.

"This is just not thinking through some shots, not going through the full process of actually doing my due diligence when I'm over the shot.

"In a format like this, I can't get lazy just because it's match play. If I miss that putt, that doesn't mean I just am carefree.

"I want to go out there and give it all I got and see what happens."

But has Morikawa done anything differently with his putting? Any different drills? Has he thought about changing from the claw grip?

"And what I have to realize is like I have a couple bad weeks, I'm not going to go search for something.

"I'm not going to go change my grip. I still trust what I'm doing. It's just how do we get a little more consistent rather than have a couple of weeks like the past."