Build your own GOLF COURSE on PGA Tour 2K21

Pick and choose from thousands of custom options as you build the wildest, wackiest and most punishing course that you’ll ever see in your lifetime. 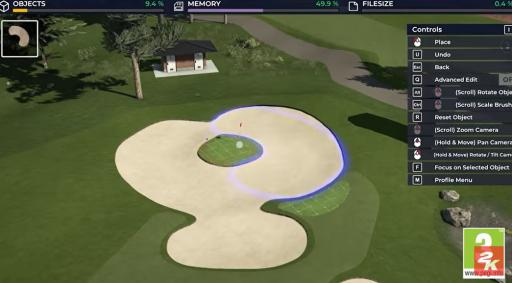 Golf fans have been screaming out for a new golf video game for years and when it was announced that PGA Tour 2K21 was set to be released this summer, it's safe to say we all got a little bit excited. We've now learnt a lot more about the new game hitting stores later this month and it even includes a feature that lets you design your very own golf course.

You’ve already seen the 15 officially licensed Tournament Players Club (TPC) courses featured in PGA TOUR® 2K21, but maybe you have the course of your dreams (or an opponent’s nightmares) bouncing around in your head. If you can dream it, you can build it with the PGA TOUR 2K21 Course Designer!

Clubhouses? Check. Cacti? Sure. Squirrels and skyscrapers? If you say so! It’s all there for building, and you’re the master architect. Once your madcap masterpiece is complete, you can share it with players around the world and across all platforms.

Watch the video below to find out more about the PGA Tour 2K21 Course Designer:

PGA Tour 2K21 is set to be released August 21 and going by the social media reaction caused by the game so far, this one will be flying off the shelves.

NEXT PAGE: 10 standout bets for the PGA Championship