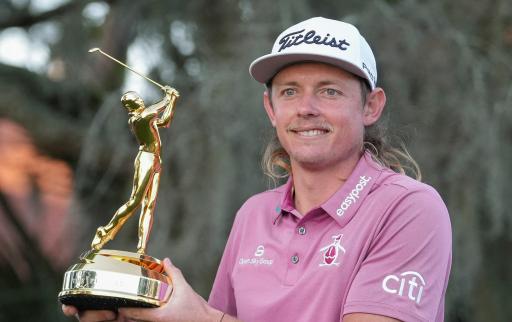 Cam Smith has decided to withdraw from next week's WGC Match Play in order to spend more time with his mother and sister following his victory at The Players Championship on Monday.

Smith, 28, sealed a memorable one-shot victory over Anirban Lahiri at TPC Sawgrass as the PGA Tour's flagship event went into a Monday finish due to inclement weather.

The Australian, who vaults to a career-best sixth in the Official World Golf Rankings this week, told the PGA Tour that he wants to take an extended break with his family, who he saw for the first time in more than two years last week.

Related: Cam Smith admits he would be lying if he said he was aiming at the pin on 17 at TPC Sawgrass on Monday

"Regretfully, I have decided to withdraw from next week's Dell Match Play," Smith told the PGA Tour.

"We had a long extended week at The Players and I just needed a little break.

"I'm enjoying my last week with Mum and my sister Mel prior to them departing home for Australia.

"Been 2+ years since the last time we've been together.

"Came down to more time practicing 'or' an extra couple days with my family. Easy choice.

Smith has now won five times on the PGA Tour, with two of those victories coming in 2022.