Collin Morikawa spoke to the media before his first round at the Valspar Championship on the PGA Tour. 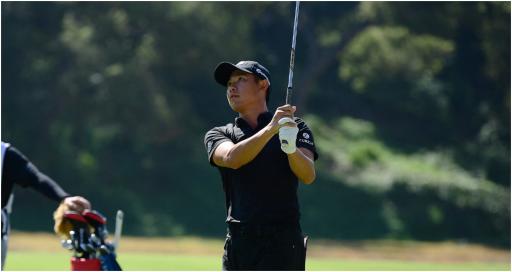 Collin Morikawa heads into the Valspar Championship at Innisbrook Resort hoping to replace Jon Rahm as the World No. 1.

And the youngster admits that he learned a lot about himself after a long, rough week at TPC Sawgrass.

When Morikawa faced the media this week, he paid tribute to Justin Thomas's under-the-radar 69 at The Players.

It was particularly impressive because the conditions, as one PGA Tour player rightly pointed out, "was like a mini tornado".

"I just tried to force some issues," Morikawa said. "And that's not how you play golf". He did end up missing the cut.

Does he feel that watching Thomas cultivate that round in those conditions mean his Ryder Cup team mate still has the edge with his iron play?

Not at all. Morikawa explained: "I mean, look, JT's iron game I've loved and I've admired, but to me, I still think Tiger has the best iron game. Like, even now. Like, I haven't seen him hit a ball for awhile.

"But when we had our TaylorMade shoots and you would see him out there and I'd talk to him and we did a little 10-minute video of watching him hit irons, it is amazing. I'm sure JT's like, that's why they're really good buddies. Like, I'm sure he's learning.

"But do I think he's better? I mean, I still think when my iron game's on, like, it's better than everyone. It would be bad for me to think otherwise because then I'm showing up to these events thinking, okay, I've got to do everything so perfect.

"Like, I still think I can still play an okay game and still get away with an [okay] week and possibly win.

"So I think the gaps in my iron game, look, there's ups and there's downs. When I was in Dubai for two weeks and, Abu Dhabi and Dubai, my game was the worst probably it has been for two years.

"So I worked a lot over the past month just to get it to where it was at Riv, so I'm at a point now where I feel really good and just hit some shots."

What exactly was so incredible about watching Woods in those TaylorMade shoots?

"Just hit every shot on command," Morikawa said.  "I mean, it was, and I can go out with some buddies or go out in a pro-am like this and tell them, oh, I'm going to hit this shot, right?

"But you could tell that he knew exactly what he was going to do and he came out exactly in the same window and it was so simple.

"Like, we want to make it that simple but sometimes for me cut shot comes easier than a draw.

Sam Burns is the defending champion this week. It was a huge victory last year for Burns and he was unfortunate not be picked by Steve Stricker for the Ryder Cup.

Morikawa has know Burns and played a lot of junior golf with him.

"Those guys were the ones that were winning everything, playing really well. He's always been solid, always a game that I knew was going to be out here on Tour, went on Tour and will be here for a long time.

"And I've seen it. I think everyone has. Yeah, I don't know what else to say."

Does Morikawa know what he needs to do to topple Rahm this week?

"No, but I assume if I win I'll get there. You know, before you ask anything else, I think the biggest thing for me is just I need to focus on the golf course.

"I say that every time, but there have been times where thinking about world number one, thinking about this and things that I should do and I just need to get back to playing the way I know I can play."

He added: "In certain events where I've been able to put it together but I'll keep doing that, right? And it's just working on those little things. So it would be huge. It would be definitely a part of my career that I would remember, but I want to stay there as well."