Cameron Smith on epic shot on 17: "I'd be lying if I said I was aiming there"

Cameron Smith admitted that he didn't intend to take such an aggressive line on the 17th hole on his way to winning The Players Championship. 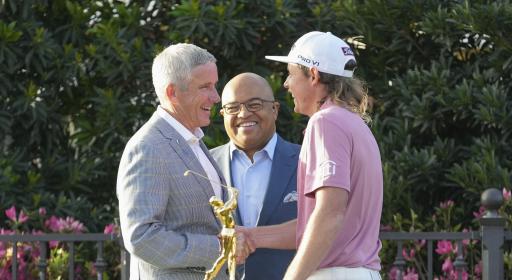 When you have a two-shot lead in one of the biggest tournaments on the PGA Tour schedule with two holes left, playing as Cameron Smith did at TPC Sawgrass will not be good for your heart rate.

The Australian had a healthy advantage standing on the 17th tee box, a hole that caused torture during all five days of the tournament.

Smith took aim and his ball looked to be going straight at the flag, despite the pin being tucked up to the right of the hole, luring balls into the water.

His aggressive line paid off. He hit his shot to just over four feet and he boxed the putt to move to 14-under-par and to take a three-shot lead into 18. But this is not what Smith intended.

"I'd be lying if I said I was aiming there. I was probably aiming 10 feet left of that," said the five-time PGA Tour winner.

ICE IN HIS VEINS

"It held it up right there at the end. That was just awesome."

Smith certainly pushed his luck to the max on the 72nd hole of the event too. The 28-year-old hit his second shot from the pine straw into the water and he was staring a double-bogey in the face.

He made an up-and-down from 57 yards for a bogey and this was enough to finish one shot ahead of Anirban Lahiri on 13-under-par.

Smith has now reached his best ever world ranking of sixth having entered the week at TPC Sawgrass ranked at 11th.

By shooting a 6-under-par 66 in the final round, Smith won $3.6 million which is the largest ever winners prize in PGA Tour history.

Next Page: Four new venues to stage final qualifying for The Open