Dustin Johnson pitched in for eagle to close out his Players Championship and tied the course record at TPC Sawgrass. 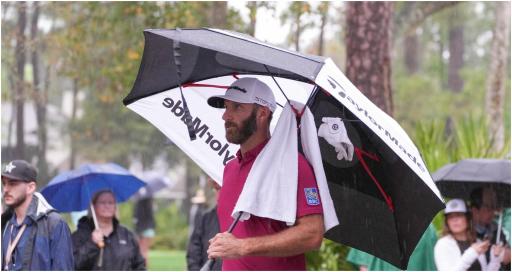 Dustin Johnson does not walk. He struts. It's a familiar sight in golf; those massive arms flailing about his body.

At The Players Championship, we sort of expected Johnson to be making more of a statement.

Despite making the cut, he was one of a number of high-profile players who struggled to make an impact at TPC Sawgrass.

Of course, former World No.1 Johnson did have the bad end of the draw. And although he did not win, he left on a high note.

Johnson pitched in for eagle at the ninth (he played the back nine first) to tie the course record of 9-under 63.

That pitch was from 67 yards and it took three hops and then fell in beautifully.

Johson made three birdies on his front nine, and dropped a shot at 15. Then he went on a tear. Five birdies and an eagle coming home.

How did Johnson see the that stunning round?

"Yeah, just played solid really. Rolled in a few putts there starting on -- made a nice putt on 18, and then another nice one on one, two, and then three. Obviously to pitch it in on the last was definitely a bonus," he said.

"I've got a little work to do still on the game, but obviously it's in there, just need to get it a little more consistent."

He added: "Yeah, it's always good when you can tie a course record or shoot a course record. I would have liked to have -- to be in contention and having done that would be a lot better."

Johnson cultivated an opening round of 69 at The Players. During rainy, windy and downright freezing second and third rounds he went 73-76 to put himself out of the reckoning come Monday.

Johnson was one of a number of players who found the water at the 17th island green.

To put things into perspective, Johnson hit an 8-iron into the green which he believed was playing 118 front. He usually hits that 165.

Still, he found the water. How did he enjoy playing in those conditions?

"For the most part, I did. Days like today, I don't mind. They're really tough, but I like the tough conditions," he said.