Seamus Power secured his first win on the PGA Tour in July 2021 and he continued to rise through the ranks at Pebble Beach on Friday. 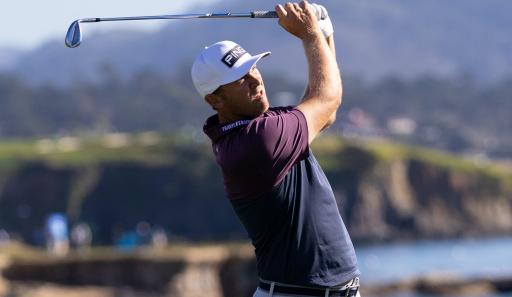 Seamus Power has broken into the world's top 50 players and he proved his credentials once again by breaking records at the AT&T Pebble Beach Pro-Am on Friday.

Power fired a fantastic 64 at Pebble Beach on day two to follow up his 64 in the first round to settle on 16-under-par for the week after 36 holes.

The Irishman, who won his first PGA Tour title at the Barbasol Championship in 2021, has set the record for the lowest score after two rounds in this event. The previous record was shared by Phil Mickelson in 2005 and Nick Taylor in 2020.

Power, 34, made an incredible 10 birdies and two bogeys at the venue that has hosted the US Open six times. He currently leads by five shots ahead of Tom Hoge, Adam Svensson and Andrew Putnam.

4 birdies in the last 5 holes. @Power4Seamus extends his lead to 3. pic.twitter.com/6juyhFXzTg

In September 2020, Power was ranked 463rd in the world after the Corales Puntacana Resort & Club Championship. He is now ranked 50th and on an upwards trajectory.

Patrick Cantlay, the reigning FedEx Cup champion and the pre-tournament favourite, shot 4-under-par at Spyglass Hill to finish on 10-under-par for the event, six shots behind Power.

Jason Day, who returned to form last week at the Farmers Insurance Open, has shown more promise this week. He shot a 66 at the Monterey Peninsula Country Club on Friday to reach 9-under-par.

Matthew Fitzpatrick, who also played on the Monterey Peninsula course in his second round, shot a 67. He is a further two shots back on 7-under-par alongside former PGA champion Jimmy Walker.

Justin Rose shot 5-under-par at Spyglass Hill to move up a significant amount of places to 6-under-par for the week. He is one shot ahead of fellow Englishman and former World No. 1 Luke Donald.