Everyone is saying the same thing after watching the latest Tiger Woods and Charlie Woods video clip at the Hero World Challenge. 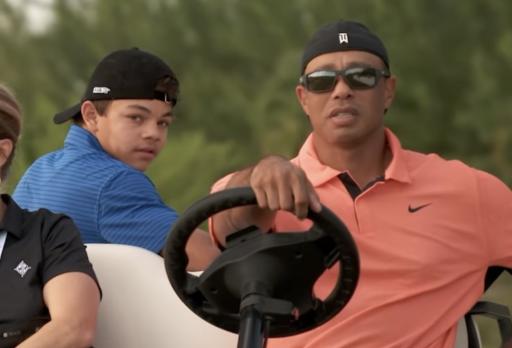 Tiger Woods has revealed how his 13-year-old son Charlie Woods is already outdriving him on the golf course ahead of the 2022 PNC Championship.

Woods made such comments while in the commentary booth during round three of the Hero World Challenge, a tournament he is hosting at Albany in the Bahamas this week.

When quizzed on when Charlie is going to outdrive him off the tee, Woods responded: "It's already happening."

He did, however, add: "He hasn't beaten me yet. But that is coming."

A video of Charlie and Tiger appeared on Instagram on Saturday evening during round three of the Hero World Challenge:

Taking a look at the comments in the PGA Tour's social media thread, and it would appear everyone is saying similar things in regards Charlie's rapid growth spurt from when we last saw him on our television screens 12 months ago.

Here's a look at some of the comments:

"What happened to Charlie?!"

"What are they feeding this kid??"

"Charlie was on diapers just 6 months ago."

"That boy mid growth spurt. It's crazy to watch."

"Charlie Woods looks prime and ready to take on the golf world. Wow!"

In case you had forgotten, here's a look at how Charlie looked this time last year:

Woods was scheduled to play in the annual 20-man Hero World Challenge but he withdrew prior to the start of the event due to another injury setback.

Despite being an unofficial PGA Tour event, the Hero World Challenge rewards Official World Golf Ranking (OWGR) points, no doubt much to the disappointment of those on LIV Golf who are still waiting to be included in the ranking system.

While talking in the studio during the third round, Woods, who turns 47 at the end of this month, said he still believed he could compete with the best young players in the game but admitted he must "get his walking figured out".

Woods also claimed he is still seeking "another big win" on the PGA Tour and he is not ruling out a 16th career major win.

Should Woods win just one more tournament then he will move into the outright record for PGA Tour wins. He currently holds the joint record with Sam Snead on 82 wins.

Despite being out on the sidelines with a foot injury, Woods is still expected to team up with Rory McIlroy in The Match against Jordan Spieth and Justin Thomas on December 10.

He will then join forces with his son Charlie Woods for the annual PNC Championship from December 17 to 18.

The PNC Championship is a father-son tournament staged over 36 holes in Orlando.