Tiger Woods' son Charlie Woods was filmed looking unimpressed as Justin Thomas tried to needle him after throwing a dart at the Hero World Challenge. 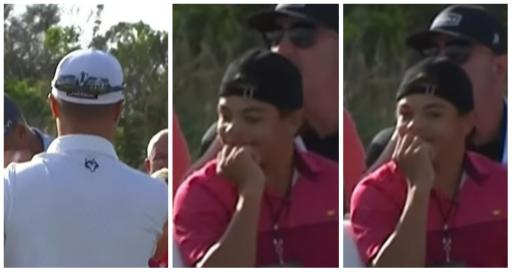 And the little cat didn't seem to have any time for Thomas trying to needle him after his Titleist Pro V1x landed only a few feet from the hole.

As you can see from the shot below - and as it is pointed out by the commentary team - it was harder for Thomas to hit it straighter off the tee.

This was a freakin' arrow...

Before Thomas walked up to the green on No. 12 at Albany, he decided to throw his tee peg towards Charlie as if to say: "Have some of that..."

Thomas went on to convert his birdie. He ultimately finished the tournament in fifth position, earning $135,000.

The tournament was won by Viktor Hovland in dramatic circumstances.

As for Thomas, he is known to have a very close relationship with Charlie. Despite Thomas being only four years old when the big cat won his first major, the pair have developed a close bond.

Tiger has pointed out before how highly he regards 29-year-old Thomas. Before the PNC Championship last year, Woods said of the two-time major champ:

Charlie, Thomas and Woods played Augusta National together before the 15-time major champion made his return to competitive golf in April.

It's more than likely that Thomas and his father and coach Mike will once again be paired alongside team Woods at the forthcoming PNC Championship.

Last year, Charlie was throwing darts of his own:

11 birdies in a row for Team Woods. pic.twitter.com/iIP9S4UDOZ

Apparently, Charlie can muscle a few drives past Tiger now.

Woods, 46, had to pull out of the Hero World Challenge last week after developing plantar fasciitis.

He is hopeful that he will still be able to participate in The Match and the hit and giggle with his son Charlie.

Woods will be able to use a golf cart for both of those events.

At his most recent news conference - which was explosive to say the least - he has ruled out the use of ever using a cart in a PGA Tour event.

Next page: Justin Thomas gets stuck into OWGR debate