New footage has emerged of Charlie Woods' swing after he shot a career-low round of 68 with his father Tiger Woods on the bag. 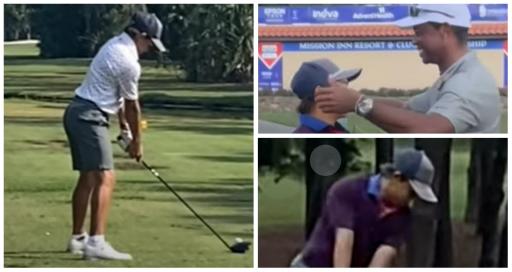 Last week we saw Charlie Woods give his first media interview after shooting a career-low round of 68 with his father Tiger Woods on the bag.

Now, thanks to some new footage coming to light, we can take a closer look at Charlie's swing. It looks like he's had a considerable growth spurt since we last saw him in action at the 2021 PNC Championship.

Tiger carried the bag for his son during the Notah Begay III Junior Golf Championship at Mission Inn Golf Club on the outskirts of Orlando on the same weekend the U.S. Presidents Cup side defeated Trevor Immelman's Internationals.

Charlie, now 13, later said of his best ever round: "My dad told me to stay patient. Play steady golf. Focus on each shot. Don't look too far ahead and just stay in the game."

One of the highlights of his round came at the par-5 14th hole where he tapped in for eagle after he reportedly almost lipped out for albatross. Charlie finished T-4 in the event in the Boys 12-13 division.

When will Tiger Woods play golf next?

Tiger has not committed to his next event. A tearful Woods poured cold water on suggestions he was planning on retiring after the 150th Open Championship at St Andrews in July.

Other than an ice bath to soothe his right leg which is held together by metal and screws, he said had "nothing planned" after his tears over the Swilcan Bridge.

Tiger usually tends to not play too much over the Autumn. It's likely he will play the PNC Championship - where Jordan Spieth will debut with his father - and make a decision on whether to play the Hero World Challenge in the Bahamas where he is the tournament host.

His caddie, Joe LaCava, had previously suggested that Tiger could potentially play three or four tournaments before the Masters.