Tiger Woods has a very simple reason why he tries to get inside his son's head on the golf course. 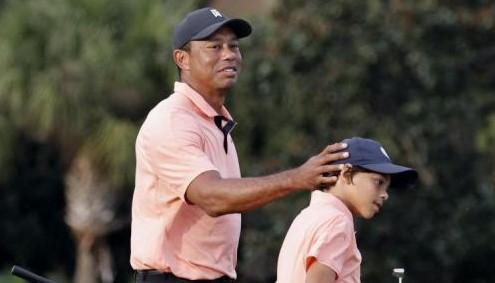 Tiger Woods was taught many things on the golf course by his late father Earl Woods, but none more key than the simple trick he now uses on his 13-year-old son Charlie Woods.

Tiger, speaking during his tournament hosting of the Hero World Challenge in the Bahamas last week, explained why he constantly tries to distract his young cub while he is out on the golf course.

That's exactly what his own father did.

"It's going to get to a point where I can't get into his head, and then no else can get in there either."

Woods was speaking about his comeback to competition during a brief stint in the NBC commentary box on the weekend.

The 15-time major champion was forced out of the Hero World Challenge last week following further injury to his foot.

But he is hopeful of still competing with Rory McIlroy against Jordan Spieth and Justin Thomas in The Match on December 10.

He will then join Charlie for the father-son PNC Championship from December 17 to 18.

Woods revealed in the comms box how Charlie is already hitting it further than him off the tee, although he has yet to beat him.

He also explained why he wants Charlie to copy McIlroy, not him.

Tiger also said there is still a burning desire to not only win again on the PGA Tour to take the outright win record, but also clinch an unthinkable 16th career major.

Next Page: PGA Tour star on DP World Tour: "I won't have time to play"