Keith Mitchell: Who is the UNDER-THE-RADAR man going for second PGA Tour win?

All eyes are on Keith Mitchell in Las Vegas as he hunts his second victory, but the high rollers are lurking behind him. 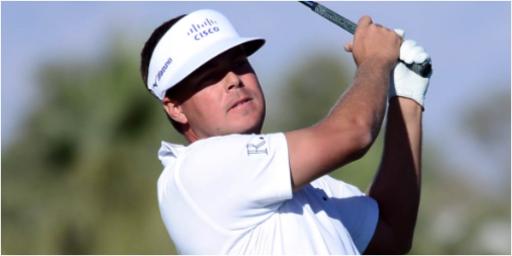 Keith Mitchell is well-positioned to claim his second victory on the PGA Tour after some flattering comments from Rory McIlroy.

Mitchell fired blistering opening rounds of 62 (10-under) and 64 (8-under) to lead the field by five strokes over Jordan Spieth among others.

The 29-year-old American has only won once before on the PGA Tour at the 2019 Honda Classic beating a stellar field.

Mitchell won by one stroke over Brooks Koepka and Rickie Fowler after he sank a 15-foot putt up the 18th to claim victory.

He is a player who largely flies under the radar but according to McIlroy is a seriously impressive player.

Now he wants to taste victory again at the CJ Cup at The Summit Club in Las Vegas.

.@K_M_Mitchell sticks it to 2ft and knocks down the putt to tie the lead at -11. pic.twitter.com/jZM3Wb4aao

"People wouldn’t maybe pick a Keith Mitchell to win a tournament at the start of a week," McIlroy said.

"But you play with him in a final round on a Sunday, he stopped me in my tracks. I was like, he is a hell of a player."

Mitchell played his college golf at the University of Georgia and then turned professional.

He first played on the PGA Latinoamerica.

His best finish there came in 2015 when he came second at the Brazil Open.

There followed two seasons on the Web.com Tour where he did not claim a victory.

His best finish there was a third place at the News Sentinel Open but his performance that year was enough to earn his PGA Tour card.

In the official rankings, Mitchell is now placed at 137th.

His highest came in 2019 when he played the Masters for the first time, finishing in a tie for 43rd which meant he was ranked 55th in the world.

Mitchell has had a number of decent results on the PGA Tour and can perhaps count himself as unfortunate not to have won more.

He narrowly missed out on victory at the 2018 Corales Puntacana Resort & Club Championship and was third at the 2021 Wells Fargo Championship.

As we have seen on the PGA Tour, it only takes one victory for players to kick it up a gear and contend regularly.

Mitchell will hope that he doesn't become known as the "nearly man" when he finally finishes playing.

"Anything Rory says is always taken to heart because he is probably one of the most looked-up-to guys out here," Mitchell said.

"He always says the right thing and he always means it when he says it, and for him to say something about me, it means a lot because right now he's always – not right now, he's always been one of the superstars out here.

"So, for him to say that, just coming from such a quality guy is really cool."

Mitchell has admitted before that he feels his game is a little erratic.

But now he hopes everything will click into place so he can join the winners' circle once again.

NEXT PAGE: GRANDMA ATTEMPTS BUNKER SHOT AND IT GOES WRONG