PGA Tour pro Kevin Kisner had to replace his caddie during the final round at The Players, but he saw the funny side of it. 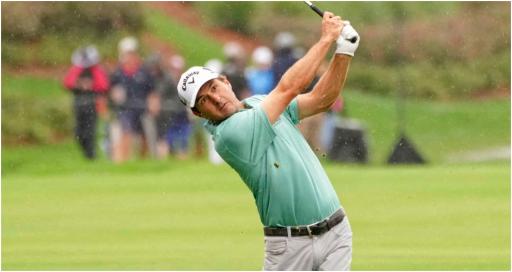 PGA Tour pro Kevin Kisner had to replace his caddie during the final round of The Players Championship at TPC Sawgrass.

Brock had a stomach illness and fell behind at the fifth hole at the Stadium Course as Kisner sought to get his vengeance.

Kisner memorably lost in a playoff to Rickie Fowler at the unofficial fifth major in 2015 and began his final round four strokes off the lead.

By the end of play, Kisner finished solo fourth and collected a pay cheque for $980,000. A hobby, this ain't.

Kisner said of his mid-round adjustment: "Yeah, I had a lot going on out there today. Went from not getting one yardage for 57 holes, 60 holes, to doing them all."

He added: "Yeah, Duey wasn't feeling well. I didn't know he was feeling as bad as he was until I noticed he was even slower than normal. Hopefully he's feeling all right."

Kisner had to put his long-time swing coach John Tillery on the bag. And Kisner thought it was absolutely hilarious.

How exactly did his swing coach fare down the stretch at the richest tournament ever on the PGA Tour?

So his swing coach was in fact asking his player for the yardages. Isn't that the wrong way round?

"Yeah, he's asking me. It's funny, it goes back to my college coach, assistant coach Jim Douglas, right out of college, caddied for me at Tour school, and that's what he said on every shot because he never got a yardage either," he said.

"How far we got, bud? So I was laughing out there with him that I was doing all the work and answering all the questions."

Did having Tillery help him take his mind off a few things?

"Well, there for a little bit it was a whirlwind because they switched kind of mid holes and a lot going on, try to figure out who had what information and who had golf balls because Duey does everything, we've been together 13 years, he's like my second wife who takes care of everything, and then I got the most disorganized human in the world caddying for me in John.

"It was quite interesting there for a few holes, but we kind of found a rhythm there in the middle of the round."