Rory McIlroy: Will his blistering Masters finish reignite the flame?

Rory McIlroy says he hasn't experienced a buzz like on Sunday at Augusta since his charge to try and make the cut at the 2019 Open. 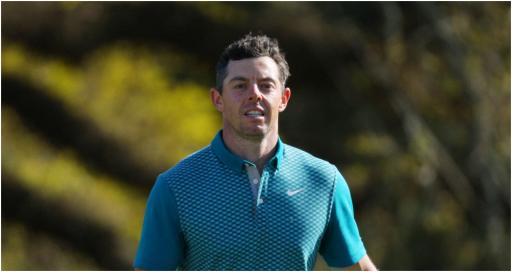 Rory McIlroy says it was great to finally feel the "buzz" of a major championship again after his best ever finish at The Masters.

Despite it being a familiar story of too little too late for the 32-year-old Northern Irishman, he was a happy man on Sunday evening in Georgia.

It was the best he had ever felt at Augusta National, a place that has chewed him up and spat him out before.

His 8-under 64 to finish solo second was dazzling, capped off beautifully with a holed-out bunker shot to bring the house down on 18.

It added some spice to the final round and McIlroy feels like it tees him up perfectly for the rest of the year and his next green jacket attempt.

After carding a bogey-free round that included six birdies and an eagle, McIlroy said he hadn't felt that way in a major since the 2019 Open.

On that Friday afternoon at Royal Portrush Golf Club, McIlroy went on a similar tear and carded a 65. It left him missing the cut by one stroke.

Back then, he said of that round: "It's been an eye-opener for me. Sometimes you're so far away and you forget about all the people that are cheering you on back home.

"And then you come and play in front of them, it definitely hit me like a ton of bricks today."

Fast forward to 2022 and McIlroy may have just been given the jolt he has needed to remind himself why he loves this game so much.

He told the media after Scottie Scheffler became the new Masters champion: "It's been a while since I felt that, and I think the last time was trying to make the cut at an Open Championship, was the last time I felt a buzz like that in a major.

"So this was certainly better than that."

Some critics may point to the fact that it was the same old story with McIlroy.

There is still something stopping him from coming out of the blocks and building a lead just like Scheffler did.

McIlroy did once open with a 65 in 2011 before his almighty collapse with a final round of 80. But everything else has been in the 70s.

There is no denying, he always starts slowly and finishes strongly.

Throughout his Masters career, he's shot 70 or worse on five occassions in the final round. Everything else has been low.

Is there any reason for that in McIlroy's eyes?

"As I alluded to earlier just about just trying to play my way into the tournament, you're not going to go out and shoot 66 every time you tee it up in the first round of a major and win by a ton of shots.

"It's happened before and yeah, it's just sort of -- these golf tournaments especially are just about, I keep saying it but just about hanging around. You sort of know what the winning score is going to be at the end of the week but just trying to gradually build day after day until you get to that point.

"You try to come out of the blocks too fast, that's when you can start to make mistakes, especially on golf courses that are as treacherous as this one or the places that we play in major championships.

"It is nice to get off to good starts and be up the leaderboard early because I feel the earlier you get up there, almost the easier it is to stay there in some ways.

"But at the end of the day, you still have to bide your time and play your way in.

"I'll have major championships where I'll start fast and have chances like the U.S. Open last year last year and I'll have starts like this where I'll get off to a slow start.

"But that's always a point in the tournament where you have a chance to make your move and today was that chance for me. Other majors it could be a third round or second round or whatever it is.

"At the end of the day we all have to play 72 holes and the 72nd hole is just as important as the first one and you just have to treat it like that."

Like many other golfers McIlroy's problem appears to be between the ears.

Perhaps he just needs to constantly remind himself that there are always people cheering him on back home.

Even his playing partner on Sunday, Collin Morikawa, noticed there was something about McIlroy's strut on Sunday.

He told the media: "You can always look at someone's walk, and it's funny because I played with Will Zalatoris yesterday, and he walks pretty fast.

"When you look at someone's walk, you can kind of see their demeanor and how they kind of move through things. From that first tee shot, I think both of us, especially him, he was moving at a nice pace.

"It was never staying on the shot he had just hit for too long. It was never rushing to the next shot. It was kind of just a good pace. That's the biggest thing.

"It's hard to describe how to do that. I mean, we can't time out our steps, but, yeah, I think if you look at it as a whole, that's kind of what it is. It's a good rhythm. Not just in our golf swings, not just over the ball, but throughout the entire day."

McIlroy has previously spoken about how he is not too concerned with his critics. He's had a hall of fame career, and he's only 32.

But perhaps McIlroy has just rediscovered his mojo.