Ian Poulter celebrated a Ryder Cup win with his baby, now he's off to college

The Postman took to social media to announce his son will be a Florida Gator. 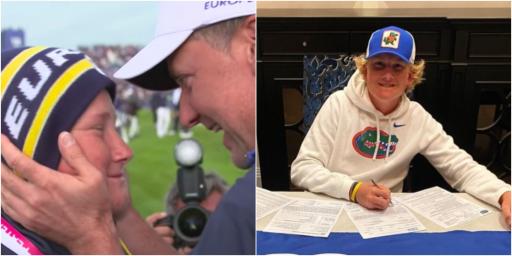 There's a famous image of Ian Poulter celebrating one of his many Ryder Cup wins unlike any other on an airplane.

Inset, Poulter's son Luke naps on the seat with a signed flag of the European Ryder Cup team draped around him alongside the trophy itself.

Now that little baby is all grown up and he's off to college.

Yes, Ian Poulter's son is off to college.

Feel old yet? Me neither.

Not many bigger days in your life than signing for @GatorsGolf

Proud to see Luke work so hard & be offered a position to join such a great team. @realjcdeacon I know you’ll guide him along the next part of his journey. @AndrewLoseyGolf you’ve done an amazing job! Go ‘s pic.twitter.com/7JVWypY2qM

Luke has signed to be a Florida Gator.

The program has produced players like Billy Horschel and Camilo Villegas.

There are quite a few PGA Tour players' children we will be keeping a close eye on in the coming years.

He absolutely bombs it.

Ian Poulter's oldest son Luke looks like he could be following in his father's footsteps. #ParentsInSportWeek pic.twitter.com/81PGE2p3IB

Of course, we are also keeping tabs on Charlie Woods, son of Tiger, but he's only just starting his junior golf career.

The Postman is in Houston this week and has fond memories of this place.

He famously defeated the United States' Beau Hossler in a playoff to seal a spot at the Masters in 2018.

He's a proud man, but also a proud father.

NEXT PAGE: SLUGGER WHITE TEAMS UP WITH GREG NORMAN