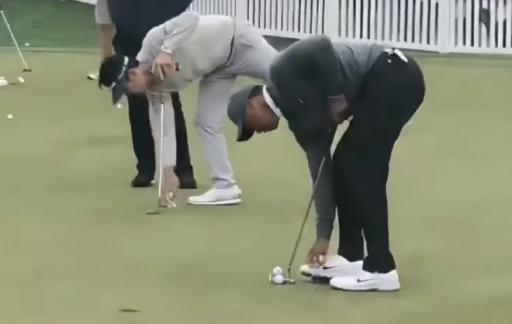 A staggering Tiger Woods putting statistic from the PGA Tour emerged on social media this week - and it involved the 15-time major champion missing just three of 1,543 putts from inside of three feet from 2002 and 2005.

These may have been peak Tiger Woods years on the PGA Tour, but this is still an incredibly impressive stat nonetheless.

A gust of wind, a bobble, a poor stroke - much can happen even on a three-foot putt, as many of us can attest when we are on the greens.

Woods will forever be known as one of the greatest putters in the game.

The putter, in particular his trusty Scotty Cameron Newport, is a club he has relied so heavily on down the years, of course alongside his impeccable short game.

Woods simply never missed when he needed to hole a putt, testament to him going on to win 15 major titles, and tying the PGA Tour record win count with Sam Snead on 82 victories.

So how has Woods become so clutch at his putting?

But so does his classic gate putting drill, which he regularly uses on the practice putting green before tournaments.

Woods makes it even tougher by putting with one hand.

Woods sets up with two tee pegs either side of the ball from within three feet of the cup, and proceeds to hole putts with one hand.

As you can see from the video above, it's a piece of cake for him, but it becomes robotic after a while.

Okay, you might not produce a strike rate like Woods did on three-footers out on the PGA Tour back in his prime, but we guarantee if you put this drill into practice the next time you are on the practice putting green, then you will certainly start to improve the consistency of your stroke.

And hole more clutch putts and lower that handicap in the process.

Try it first with two hands on your putter like normal, then when it becomes second nature, switch to using one hand and see how you get on.

NEXT PAGE: JUSTIN THOMAS GIVES DETAILS ON HIS LATEST CONVERSATIONS WITH TIGER WOODS