A new era of golf is set to get underway from 2022 as the European Tour ripped up its 49-year history. 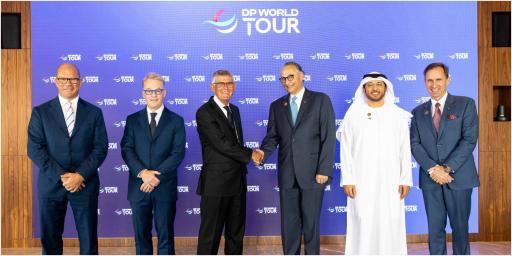 There's a phrase which is constantly used when dodgy sources of money enter a sport.

"This increases our efforts to grow the game globally".

It's trotted out time and time again whether it's in golf, football or even motor racing and is an expression which now feels truly hollow.

The European Tour has come to a depressing, albeit unsurprising end.

Exciting times for our sport after today’s announcement in Dubai. Massive thanks to @DP_World for your support of our Tour and of the game of golf. We have always played a truly global schedule so the #DPWorldTour has a very nice ring to it!!! https://t.co/viRD3XzSb2

From 2022, the rebrand sees the formation of the DP World Tour with dizzying sums of money up for grabs.

Grow the game? Surely this is just a case of the rich getting richer.

Stay out of our way Greg Norman et al, we want to line our pockets too.

So what do we actually know about the DP World Tour?

In a glitzy press conference, the presenter and broadcaster Nick Dougherty ushered in the brave new dawn alongside Tommy Fleetwood.

MORE: WHAT HAPPENED TO ANGEL CABRERA?

A great day for the DPWorldTour. Well done to all involved. #DPWorldTour @EuropeanTour @DPWorld https://t.co/nOPL6GIydw

Ian Poulter also expressed his joy with a video message, as did Open champion Collin Morikawa.

The players are excited and no doubt this has all the hallmarks of the European Tour and PGA Tour avoiding lawsuits with their players.

Why risk playing in the Saudi Golf League and the glitzy events under the umbrella of the Asian Tour with Norman when we have this.

The schedule is absolutely jam-packed in 2022.

A minimum of 47 events will feature in 27 different countries.

Those are in the UAE, Japan, South Africa and Belgium and it will expand the Rolex Series.

MORE: HOW FACE PAINT LED TO A RULES DISPUTE

It was a great honour to be part of the announcement today that the European Tour will become the DP World Tour from next season. It means bigger tournaments all around the world.

to the @EuropeanTour and @DP_World for making it possible. The future of golf is looking good! pic.twitter.com/XdzIej2Dmo

Three tournaments will be co-sanctioned with the PGA Tour as a result of their strategic alliances to keep other similarly greedy hands at bay.

At the season ending DP World Tour Championship a record $10m prize fund will be up for grabs.

A number of high-profile players have already expressed their delight at the news.

He's at least managed to call a spade a spade and describe efforts of new, bigger prize-funded tours as a money grab.

MORE: THIS IS HOW IT FEELS TO SWING LIKE DECHAMBEAU

Huge news @europeantour will no longer be but @DPworld Tour going forwards. Dubai pushes the boundaries of what's possible and without failure lives up to expectations. I have no doubt our tour is in great hands and will go from strength to strength. To everyone involved

The European Tour have outlined all these plans in a detailed release, too.

At the footnotes, they talk of their efforts to grow the game globally.

There will be investments to the Challenge Tour and its overall infrastructure but they decline to say how much money they will get.

Have they told you how much will be on offer next season on the DP World Tour?

They also talk of a commitment to grassroots golf but that gets little more than two lines of text.

MORE: WOULD YOU MISS YOUR CHILD'S BIRTHDAY TO PLAY AUGUSTA?

MORE: VIDANTA VALLARTA TO HOST THE PGA TOUR IN MEXICO

Brilliant news for @EuropeanTour
Announcing @DPWorldUAE as a title sponsor for the Tour will be huge for the future.
Wish I was 25 again!

Commitment? Tell us how.

Apparently there will be "continued collaboration with the women's game", too.

Again, we are lacking in details here.

At the end of the day, they are a footnote.

Sadly, this is all not a shock.

The game absolutely has to go where sponsors are to attract players.

Coming to a country near you.. #DPWorldTour https://t.co/JNPllUJNHR

Money talks and everyone has a price.

At least in my opinion, it's a shame the European Tour has now been robbed of its identity.

Years of rich history - 49 to be exact - ripped up in unrepentant fashion by the Tour's chief executive officer Keith Pelley.

The only partial, saving grace I can think of at this stage is how this could keep the Saudis' blood-stained hands off the leading players.

For now at least.

Thoughts on the European Tour rebranding itself as DP World Tour?