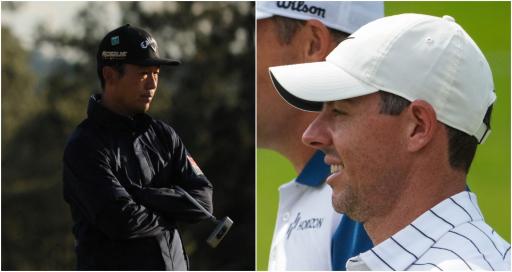 Rory McIlroy says he “doesn’t understand” Kevin Na’s PGA Tour resignation but added he “was not surprised” by the American’s decision.

Na sensationally quit the PGA Tour this week – perhaps trying to protect himself from litigation – so he could go and play the Saudi-backed LIV Golf Invitational Series.

In a stunning post, the 38-year-old who has won six times on the PGA Tour in more than 450 starts claimed his decision saddened him but he was left with little choice.

Northern Irishman McIlroy was asked about Na’s choice and the four-time major champion – who has spoken endlessly about this topic – admitted he was confused but not surprised by his decision.

“I guess maybe he’s protecting himself down the road. Maybe some legal issue. He obviously sees the LIV Golf tour is the place he’s going to play on going forward,” McIlroy, 33, told Golf Digest.

“Look, I get it for Kevin. He’s never been… he’s qualified for the Open Championship a few times and not gone over. He likes to do what he likes to do, and he’s his own person. No, I’m not surprised.”

He added: “I really don’t understand the decision at this point,”

Na has joined Dustin Johnson as one of the higher profile names on the PGA Tour to go play on the “start-up” league that is fronted by Greg Norman and funded by Saudi Arabia’s PIF.

When PGA Tour players place a tee in the ground at Centurion Club, St Albans, next week for the first of eight $25million events we are likely to see the PGA Tour take action.

Other PGA Tour pros were asked about Na’s decision.

Here’s what they said to GolfDigest:

“Did he resign because he didn’t want to go down the legal route? If the legal route leads to something like a ban from the PGA Tour, I don’t think the tour can pull our pension … or whatever. There must be something in there that he thought this is the best thing for him, to resign. If I were him, I would stand my ground a little bit. Any way this goes, though, I don’t think this is a great look for golf right now.”

“I think he is going to be one of the best players over there, so good for him if that’s what he wants to do. He’s been in the Tour Championship for like the last couple of years. I would think the tour has been pretty good to him over 19-20 years in his career. I don’t understand how you resign. That’s a bold statement. What if the LIV folds in a year? I mean, can he resign his resignment? I don’t know. Do whatever you want, but I don’t think you have to resign from the tour to do this.”

“I think life is a really long time, so it seems silly to me sometimes when people say that they want to resign from something or they pledge their fealty or whatever it is.You don’t know what’s going to happen next week, let alone five or 10 years from now.”