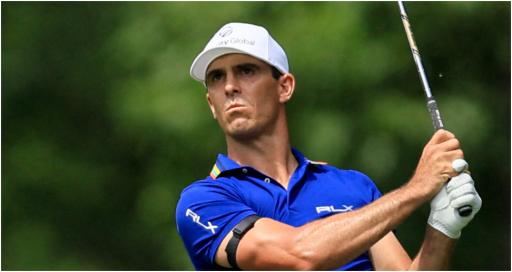 Billy Horschel overcame a shaky start to claim the Memorial at Jack’s place by four shots thanks to a devasting eagle down the stretch which closed the door on the chasing pack.

The American did not come into Muirfield Village as one of the favourites given the stacked field which included Rory McIlroy, Jon Rahm, Cameron Smith and Collin Morikawa.

But by late afternoon on Sunday Horschel looked in full command as he claimed his seventh PGA Tour victory with a final round of 72.

Horschel had opened the week with a steady 70, went two strokes better on Thursday and on Friday produced one of the most sensational rounds of his career with a bogey free 65. Eight birdies. Not even a five was etched onto his scorecard.

The 35-year-old admitted this week that he was ticked off about poor performances at the majors but beating this field will give him an extra dose of confidence ahead of the U.S. Open at Brookline.

Horschel walked off 18th green to get his thoroughly deserved handshake from 18-time major winner Nicklaus where he told the Golden Bear he tried to play a round “like you or Tiger” would.

“Just put in it in the fairway and into the middle of the green,” he told the “big man”. Horschel started steadily but made bogey at No.6 as he turned in 1-over par.

A birdie at No.10 followed but he dropped another shot at the par-3 12th after his poor tee shot that found the bunker. A treacherous downhill shot with water looming led to that bogey.

But Horschel closed the door on No. 15. He sent his second shot from 257 yards onto the green then drained his eagle putt from all of 52 feet. Aaron Wise, chasing, could only applaud.

In the end, Horschel finished four strokes ahead of Wise at 13-under par. Elsewhere, Patrick Cantlay returned to some form and finished T-3 alongside Joaquin Niemann.

Max Homa started his charge brightly on Sunday but a crippling double bogey out of nowhere ended his hopes. Will Zalatoris, again, finished inside the top-10.

Sahith Theegala, Daniel Berger and Sungjae Im also finished on the same score as Zalatoris. But this day belonged to the superb Horschel.

His rounds of 70-68-65-72 were enough to see him take home a cash prize of more than $2million. That’s someway to rebound from a missed cut at Colonial.

“Feels pretty good,” Horschel told Sky Sports. “I was just nervous, wanted to get going. Got in my own little zone. Never felt like my heart was beating too fast.”

He added: “It’s pretty special. I’ve never won a tournament with my wife or kids here. It’s so special. I’ve wanted this. For Jack to be here and shake his hand. I tried my best to play like Jack today.”