Dustin Johnson won his match against Mackenzie Hughes on Wednesday at the WGC Match Play and it was thanks to a monstrous drive on the 16th hole. 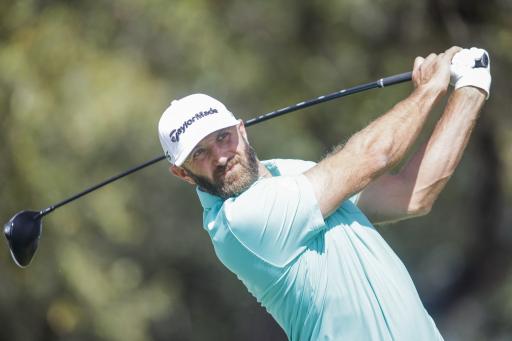 Dustin Johnson crunched a drive 422 yards down the fairway on the 16th hole at Austin Country Club, on his way to beating Mackenzie Hughes in the first round of the WGC Match Play.

Johnson was stood on the 16th tee box 2 up against his Canadian opponent and he hit a monstrous drive on the 574-yard par-5.

The drive was later corrected to 412 yards, but nonetheless, it was still an incredible shot. Johnson went on to win the hole and the match 3&2.

Johnson had been 1 down after eight holes, but he tied things up at the turn and didn't go down for the rest of the match.

The former World No.1 won the WGC Match Play in Texas in 2017 after beating the current World No.1 Jon Rahm in the final.

Also in Group 8, Max Homa beat Matthew Wolff 3&1. Johnson and Homa are now in a prime position to make the top spot in their group and qualify for the last 16.

The American pair will face off in round three of matches on Friday. The winner of this match will most likely come top of the group.

In the other matches on Wednesday, Bryson DeChambeau notably halved with DP World Tour veteran Richard Bland despite benefitting from rules controversy.

Justin Thomas was on the end of a shock defeat at the hands of Luke List, which opened the door for Kevin Kisner in Group 6 as he beat Marc Leishman 4&3.

Collin Morikawa, Viktor Hovland, Jordan Spieth and Scottie Scheffler all managed to secure points in the first round of matches.

Next Page: Thomas Pieters throws another strop on PGA Tour at the WGC Match Play