Bryson DeChambeau had an entertaining return to the PGA Tour with a filthy stinger and an interesting rules debacle. 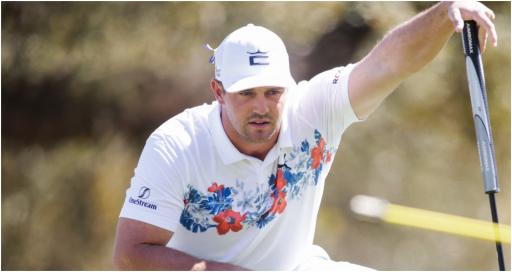 Bryson DeChambeau halved his match with England's Richard Bland on his return to the PGA Tour at the WGC Match Play.

DeChambeau's showdown at Austin Country Club against the Englishman was scrappy but no doubt gripping entertainment.

The big American's first tee shot was a bit wild as he showed a little but of rust but he soon got into the swing of things.

He hit one of the filthiest stingers we have seen with a ball that didn't get above 19 feet through the air.

DeChambeau teased us before his match saying that he wasn't going to go "fully at it" but he sent one drive 372 yards into a 10mph wind.

He was also was involved in a bizarre rules fiasco and he didn't even know it.

Earlier in the day Belgian Thomas Pieters saw his second shot at the drivable par-4 13th run through the putting surface.

His ball came to rest in a sprinkler head.

Ordinarily, you would think this was fortunate for Pieters. But it turned out to be something that sent him into a bit of a rage.

The sprinkler head was inside the hazard line, meaning he had to play it as it lied. Pieters watched his opponent Tom Hoge drain his birdie from 20ft.

So the Belgian walked up to his ball and chipped it out half-heartedly. He didn't really try and hole it for the half.

Then he lobbed his ball in the water. It was one of the best strops we've seen from someone who can get hot under the collar.

DeChambeau found himself in the exact same situation when his ball came to rest in exactly the same sprinkler head at the same hole.

But DeChambeau was granted relief. The rules officials later confirmed that the sprinkler head was never intended to be inside the hazard line.

Because the Hoge-Pieters match had no bearing on the DeChambeau match, the mistake was sorted mid-competition. They repainted the line.

In the end, DeChambeau had to make do with a half after a gutsy performance from the world's number 60.

Did DeChambeau have butterflies in his stomach upon his return?

"To be honest I'm very happy and content with the place that I'm at right now, and I feel like I'm progressing in the right direction.

"There's a lot of things that people don't know behind the scenes that I'm very, very pleased about in a very good way.

"My body is healing. That's a very positive thing that I'm happy with. Today it didn't fail.

"I thought there might be a moment where it got really tired and fatigued, but to be honest it's still really solid, so I'm proud of my hand, proud of my body, proud of my attitude."

Scroll down for the full results from day one

More: Scottie Scheffler hits his eagle putt into the water!

Full results from day one: