Thomas Pieters throws yet another strop on the PGA Tour but still goes on to win his R1 match against Tom Hoge. 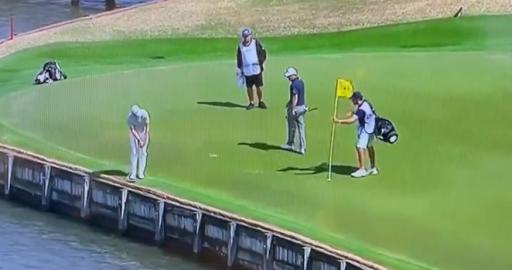 Thomas Pieters threw yet another strop on the PGA Tour after not receiving a drop from a sprinkler head in the penalty area on the 13th hole during his WGC Match Play round one match with Tom Hoge - but in all fairness, he had every right to feel a little hard done by given the ruling that ensued.

Pieters fired a tee shot down the short par-4 13th to the right of the green and then chipped down to 14 feet.

The only issue for the big-hitting Belgian was that his ball had ended up in a spinkler head in the fringe, just above the water.

Only it was later deemed an incorrect ruling, but only after Pieters' match had ended.

Incredibly about half an hour later, Bryson DeChambeau was faced with the exact same scenario as Pieters with his ball ending up in the sprinkler in the penalty area.

But DeChambeau got a free drop.

A further five minutes later after the hole was completed, a rules official then spray painted the side of the grass over the sprinkler head green to remove the red line.

Hoge drained his birdie putt on the 13th hole from 20 feet from the fringe, meaning Pieters had to hole out to force a halve.

A frustrated Pieters then casually walked up to his ball and chipped it past the hole to some 20 feet.

He then made a mess of kicking his ball into the water.

Thankfully for Pieters, he calmed down and went on to win his match 2&1 after nearly holing his tee shot on the par-3 17th.

Pieters earns a point for his victory and he will now face Min Woo Lee on Thursday before facing Billy Horschel on Friday.

Negligent marking of the penalty area line meant the sprinkler was inside it, so no relief under the rules. Correct call - and Pieters should note he would have been in the water if the sprinkler hadn't stopped his ball. Blame the man with the red paint, not the rules official.

Pieters is renowned for being one of the hot heads on Tour.

He was seen launching his ball over the back of the green and then kicking his golf bag at the Genesis Invitational on the PGA Tour last month.

Pieters has done much worse than that before.

Just check out the below links to see for yourself.

Watch: Thomas Pieters throws yet another strop on the PGA Tour