Bryson DeChambeau benefitted from a dramatic rule change on the 13th hole at Austin Country Club, which Thomas Pieters didn't benefit from earlier in the day. 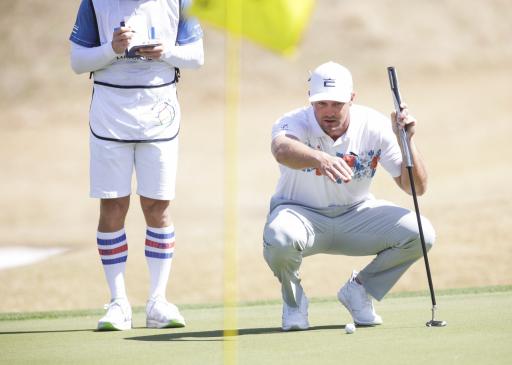 Next to the 13th green, Pieters' ball came to rest on a sprinkler head after two shots. He assumed he was entitled to relief, but this wasn't the case.

The sprinkler head was deemed inside the penalty area as the grass with red paint was resting against the top of the sprinkler. Pieters was not best pleased and he carelessly chipped his ball off the sprinkler and lost the hole. Thankfully for him, he won the match.

Imagine moving the sideline during the middle of an NFL game. pic.twitter.com/2OpYkUasqK

"We talked about it as a committee and felt very firmly, two wrongs don't make a right. We've got to correct this because clearly, it should be outside."

Young said that the official in Pieters' match decided on that ruling because of the red paint touching the sprinkler head, but this was not the intent of the course set-up.

Rules official Craig Winter was covering DeChambeau's match and he contacted Young to say they had the same situation. But this time, they ruled it differently and gave the former US Open champion relief in order to correct the rule.

The Bryson situation with the sprinkler on the 13th hole was raised just as the officials were on their way down to spray paint the penalty line.

"I was happy it was up first, then they said you can't get relief. I was like, what are you talking about, it's in the sprinkler head and outside of the hazard," DeChambeau said after his match.

"I had a rules official come up and he clarified it to me, that Thomas didn't get relief. I was like, well, you guys did - he goes, yeah, but we changed it because it just wasn't right, and apparently they can do that in match play. I feel really bad for him, and a lucky break for me."

It seemed a very controversial decision to change a ruling halfway through a day of competition, but individual matches don't affect other ones in different groups.

"If the shoe is on the other foot and I wasn’t getting a drop I think I’d be throwing the ref in the water," Bland said after the match. Very well put indeed.