Dustin Johnson has been speaking about his game, the Super Golf League and Ian Poulter's "offer" by the Saudis. 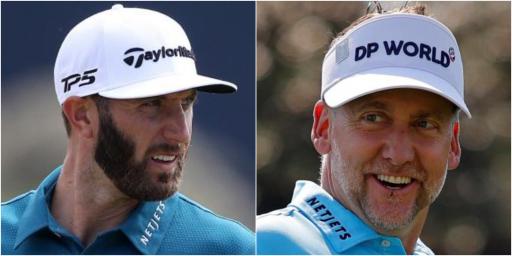 Dustin Johnson admitted he likes the concept of a super golf league and answered "we'll see" when questioned if he would like to take part.

Speaking ahead of the Saudi International, Johnson was asked about "the noise" around the concept and whether the news about Ian Poulter's offer was true.

It has been reported by the Daily Telegraph that Poulter, 46, has been offered millions to ditch his current allegiances and back the concept.

A lucrative deal, yes, but it would mean Poulter would be ineligible to partake in any more Ryder Cups either as a player or a captain.

Asked about the concept, Johnson said: "Yeah, I think it's a really good concept. I think it makes it a little more interesting for the fans and the players."

When asked if he would be tempted to take part, Johnson, 37, a two-time major winner replied: "We'll see."

Johnson was also asked if he had a similar offer to Poulter, and he said: "I can't speak for Ian. Yeah, I'm sure they're - well, yeah, obviously they have or haven't, I'm not allowed to disclose. You'd have to ask Ian that one."

Pressed further whether he had a similar offer, Johnson said: "No, not similar. It's not similar."

Johnson played in the CJ Cup at Summit last October but then took a break until last week where he kicked off his 2022 on the PGA Tour at the Farmers Insurance Open, where he placed 25th.

That break and Viktor Hovland's ascension meant that he has now slipped to fifth in the world rankings. He was previously the world number one and memorably won the Masters with a record-breaking lowest score of 20-under par.

Now the goal is to get back to the top. "Yeah, I feel like the amount of talent in the game of golf right now is incredible," he said. "You have to play well every single week. It's very tough to stay at the top just because the level of talent of the guys around you.

"There's a lot of really good players, and so yeah, for me, I took a break because I felt like I needed it, and I wasn't real happy with the way I played last year. Yeah, so just wanted to kind of reset and prepare for this year. Hopefully the goal is to come back and play a lot better than I did last year."