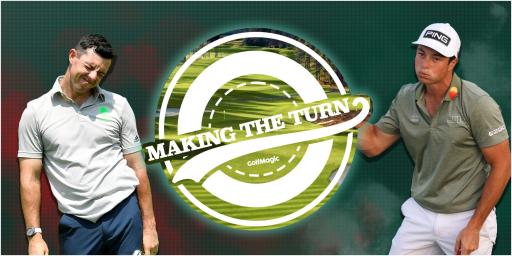 Rory McIlroy headlines our golf coverage on Making The Turn this week: and for the wrong reasons.

If you weren't aware, this is where you can head to every single week to get your golf fix.

Bryson DeChambeau features. Of course he does. It's never dull in the Life of Bryson.

Oh, and so does Brooks Koepka. Brooks went blonde at Torrey Pines and golf fans enjoyed it to say the least.

Elsewhere, the impressive youngster Will Zalatoris will have to wait for his first PGA Tour victory after a playoff defeat to Luke List.

It was all looking so promising for Zalatoris but as we all know victories do not come easy.

That first win will feel so much sweeter, William.

A former world number one also returned to form and was in contention again.

Let's take you back.

Bryson DeChambeau talks fore and gets injured at Torrey Pines

DeChambeau began the week talking about the subject of shouting fore on The Rick Shiels Golf Show.

He explained his take on the controversial topic.

DeChambeau was also visibly in agony at Torrey Pines where he missed the cut at the Farmers Insurance Open.

He has not commented yet on if he will play at the Saudi International after having issues with his sore wrist.

There was also this moment of utter hilarity.

Justin Thomas wasn't so sure.

What do you think? Is Koepka about to swap his golf clubs for a mic.

Will the real Brooks Koepka please stand up?

Apparently, he's not keeping it for long and will go back to his natural colour for his wedding to Jena Sims.

Jon Rahm explains why he is so passionate

The world number one has been in somewhat of a funk lately.

The putts haven't been dropping. He's not been a happy camper.

Of course, you will know by now a video clip recently went viral of him cussing out the PGA Tour's set-up at The American Express.

He explained that thought process here.

Poulter likes to mock Hovland as much as he can.

He did so before the Dubai Desert Classic, which Hovland later went on to win over Richard Bland in a playoff.

Does anyone want to be Europe's Ryder Cup captain?

Henrik Stenson has been touted as the favourite.

Colin Montgomerie lashed out at some of the pairings and choices at Whistling Straits.

Thomas Bjorn might captain again. The rumour mill is in overdrive.

Meanwhile, Luke Donald has emerged as the most likely to be in charge in Rome.

Mackenzie Hughes gets screwed over on the PGA Tour

It cost him dearly, though it has to be said this was a right balls up.

Video of the week

Our equipment and video editor Alex Lodge tested out the new Callaway driver.

Suffice to say, the recording didn't go to plan.

Do we need to say any more?

Does he need a new caddie?

Who caught this one in the bush?!

Hovland rises to number three in the world with Dubai win

The only way is up for Viktor Hovland.

What a win. He came from six strokes behind to win the Dubai Desert Classic on the final day.

Surely you have to book him to win a major this year.

This was an epic final round from Luke List.

He claimed the win at the Farmers Insurance Open at Torrey Pines as the sun set with a playoff win over Will Zalatoris.

Both players sent their tee shots at the 18th hole into the bunker, landing only a matter of inches from each other's ball.

In the end, List put his approach to a kick-in birdie and Zalatoris couldn't match it.

| Jason Day goes from two shots behind to tied for the lead going down the stretch at Torrey Pines. What an unbelievable shot this was . pic.twitter.com/V5SX5sAkG8

Jason Day was in the mix again.

And how great it was having him compete down the stretch.

He holed out for eagle with a wonderful shot, but two late bogeys put an end to his hopes.