Jordan Spieth discusses what he makes of visitor Justin Thomas and what he thinks of the rebel tour drama. 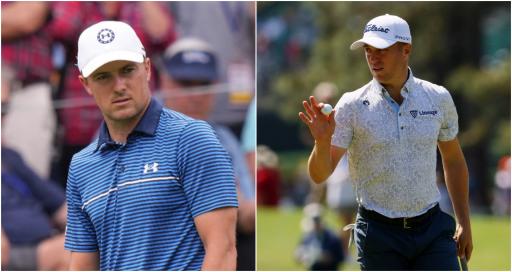 Jordan Spieth says he has "no complaints yet" from his house guest Justin Thomas this week but fears the World No.8 may not be entirely happy with the longer commute to TPC Craig Ranch for the AT&T Byron Nelson.

Speith memorably bounced back from a frustrating Masters performance where he missed the cut for the first time in his career with his 13th win on the PGA Tour at Harbour Town Golf Links.

That week involved a hilarious moment where he revealed he took the advice from his wife Annie to take a deep breath and wait five seconds before going to clean up small putts.

Spieth is not the favourite this week at the AT&T Byron Nelson. World No.1 Scottie Scheffler, Justin Thomas, Sam Burns and newly-married Dustin Johnson are all favoured by the bookmakers ahead of him.

Spieth told the media: "Well I took like a week and a half off all together and just kind of hit the reset button.

"It was a really busy spring, even the weeks off I was traveling and really busy, not ideal for your golf, but just some -- my brother got married, stuff that's more important.

"So I finally had kind of a break, used it to actually be a break and then started back into practicing some and then playing more the last four, five days to just those little kind of fine tuning shots, having to make your 5-, 6-footers that you, that on a practice greened you end up knowing where it's going to break, so that takes part of it out.

"So [I have been] getting back to reading greens, matching line and speed up, so I feel good about where things are.

"I made a lot of putts from fringes this year, it's a weird statistic that will show up on chipping and not on putting."

Spieth is hosting Thomas, Jason Dufner and their partners this week.

How did that work? Did JT invite himself over?

Spieth said: "So I think in an ideal world he would stay closer to the course, but I think he would have felt too guilty not staying at our house since we live here.

"So that's kind of, he didn't say that, but that's probably how, you know, when he's driving home at rush hour I think he's probably like, 'Man, you know, all right, I guess we got to go back there'.

"But it's a lot of fun. We stay together probably more than half the tournaments in a season anyways now and so it's not really much different, other than I get to sleep in my own bed.

"But it's nice hanging out at night, get to kind of show him around Dallas a little bit and eat some good food and then we'll go on next week and do the same thing."

Before Spieth departed his press conference he, too, was asked about the drama unfolding between the main tours and the LIV Golf Invitational Series.

The PGA Tour and DP World Tour have drawn a line in the sand by denying players waivers for the first event of the Saudi-backed rebel series in England next month.

What does Spieth make of all that?

"And I believe that they're likely getting the best legal advice possible to know what the steps are going forward.

"I was on the board and the PAC [Players Advisory Council], but I rolled off, so I'm not in those discussions anymore and I'm perfectly happy with where I'm at and so I'm kind of as a bystander going to be a little interested to see how things play out."