Will Zalatoris on Scheffler: "Good grief, man, like have an off day"

Will Zalatoris says he feels it's time to get that illusive win on the PGA Tour as he draws inspiration from "Tigeresque" Scottie Scheffler. 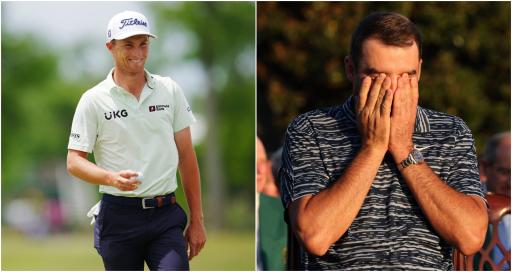 Will Zalatoris says he feels like it's time to get that illusive win on the PGA Tour as he bigged up his former junior rival Scottie Scheffler.

Zalatoris, last year's PGA Tour rookie of the year, finds himself in the same territory that Scheffler will be very familiar with.

Simply put, Zaltoris is very, very good at golf barring a few yippy putting strokes and perhaps has taken over the moniker of "the best player yet to win" from the Masters champion.

Zalatoris has had chances. His best opportunity this season to taste that victory came at the Farmers Insurance Open at Torrey Pines.

The 25-year-old ended up being on the losing end of a dramatic playoff against Luke List, who won his first PGA Tour victory on his 206th attempt.

Zalatoris had an eight-foot putt for victory at the 18th hole for the outright victory. He heads into the AT&T Byron Nelson this week full of confidence anyhow. He lives in Texas and therefore he feels comfortable playing a course he is familiar with.

"Yeah, I mean, definitely," he said when asked if it's time to get the first win.

"Like I said every part of my game has been feeling pretty good.

"This is a great place for me, I love being here, got a lot of family and friends.

"Staying in my own bed helps, but like I said, it's one of those where the win's just got to get in the way and if I keep playing the way I am I know that it's going to come soon."

Zalatoris has known Scheffler, 25, for a long time. They featured on the same Walker Cup side together for the United States.

Watching him succeed has fired him up, Zalatoris said.

"Yeah, it kind of goes back to even on our Walker Cup team, eight out of the 10 guys are on the PGA Tour right now and at one point I think three guys had won either on Tour or on the Korn Ferry Tour, and I didn't have status anywhere," he said.

"So if anything it [watching them] was motivating because I knew I could do what they were doing, I just had to kind of keep plugging along.

"So seeing what he's doing obviously is borderline Tigeresque, obviously with the incredible golf that he's played.

"But at the same time the part that I love so much about Scottie is he's just such a good dude.

"And it tastes like vinegar coming out of my mouth, considering the amount of golf we play together, because I love him to death, it's really cool to see.

"And obviously playing the games at home together and him playing well and even the other day I thought I played pretty good at a little event we played here at home, shoot 66 and he comes in with 63 and it's like, 'Good grief, man, like have an off day'.

"But like I said, he's setting the bar pretty high right now and obviously he's kind of the guy to chase for all of us. But what he's doing is borderline Tigeresque, it's pretty cool to see."