WATCH: Jordan Spieth escapes once again with "shot of the year"

Jordan Spieth hit a fantastic recovery shot during Friday's second round of the AT&T Byron Nelson on the PGA Tour. 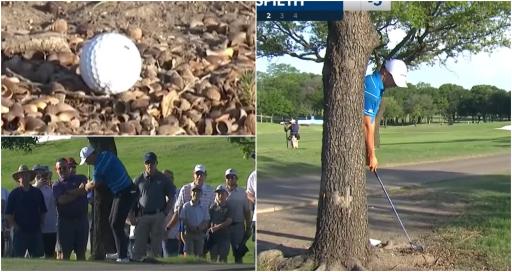 Jordan Spieth added another incredible shot to the Jordan Spieth escape act collection during Friday's second round of the AT&T Byron Nelson on the PGA Tour.

Spieth, who recently claimed his 13th PGA Tour victory at the RBC Heritage after missing the cut for the first time in his career at the Masters, started his second round on the 10th hole at TPC Craig Ranch.

Unfortunately for the 28-year-old, he sent his tee shot way, way right and left himself with a near impossible shot to get onto the green. But as we've seen before, Spieth has fine-tuned his Houdini act.

At Pebble Beach earlier in the season, he decided to take on a shot where almost certain death would have followed had he lost his balance and fell forward. This situation, obviously, wasn't as scary for wife Annie and his family. But where there is a will, there is a way.

Spieth's golf ball came to rest up against all manner of debris. Some acorns. A tree root. It was a bare lie too. Spieth barely had a swing.

Watch the clip below. Spieth takes his club back and somehow doesn't make contact with the tree and clips the ball away as well as he possibly can. "Go!" he yells after the hitting the ball.

"Oh my goodness," the commentator exlaims. "He's trying it!"

Spieth managed to safely two putt for a par. He then made birdie on his next three holes as he vaulted up the leader board in Texas.