Ernie Els says Tiger Woods had this one quality that made him different from the field. 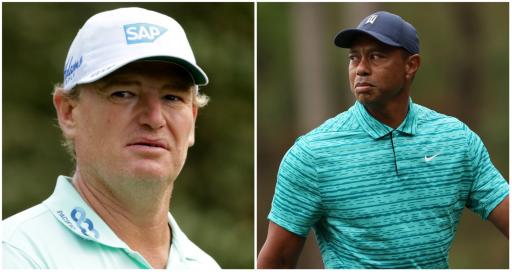 Back in his heyday, one of Tiger Woods’ nemesis on the golf course – if he had one – was South Africa’s Ernie Els.

The Big Easy has been grouped with Woods in PGA Tour events as many as 20 times. They also faced off at the 2019 Presidents Cup.

Of course, Woods and the United States side got the better of the International Team in 2019, winning 16-14.

Woods has now tied Sam Snead's record of 82 wins on the PGA Tour. Back in his prime, Els won 19 times on the circuit.

Els recently joined Golf’s Subpar podcast where he revealed what he thinks separates the 15-time major champion from others.

According to 52-year-old Els, who has won four majors, it was Woods’ intensity on the first tee. Woods still has that same intensity today, Els added.

Woods limped out of the most recent major at Southern Hills at the US PGA Championship. He is targeting a return at the JP McManus Pro-Am at Adare Manor before the 150th Open at St Andrews.

It was off the back of his return to the game at the 86th Masters less than 14 months after he suffered commuted fractures in his right leg after overturning his luxury Genesis SUV in a car crash.

Els told the podcast: “People ask me this question a lot, is what separated Tiger from us? There’s a lot of things, but the one real factor was his intensity on the first tee.

“On the first tee you just want to get in the round and see how things are, testing out the waters of the competition.

“Hopefully by four or five you are even par or one under and get into the tournament.

“A lot of us were like that, but Tiger, he was different. On the first tee he was ready to go.

“He was ready to absolutely strangle the golf course and get to the field eventually and really take down the tournament. He wasn’t there to mess around.

“He didn’t play too many events but when he played, he was ready to go.

He added: “He was absolutely focused on his job.

“That is one thing that separated him then and still separates him today. I don’t see that intensity from other competitors before the first round on the first tee.”