J.T. Poston goes low as Hoffmann avoids penalty for hitting his own hat

J.T. Poston has the early lead at the John Deere Classic at TPC Deere Run on the PGA Tour. 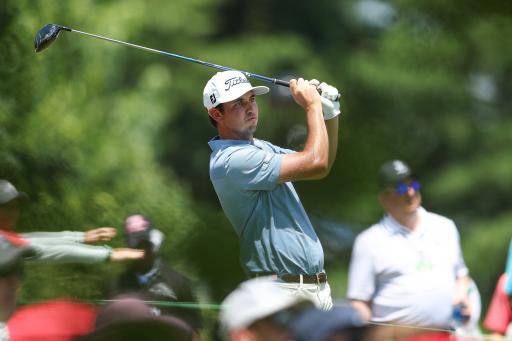 J.T. Poston admitted it was “just one of those days” after firing a stunning 9-under par 62 to take the early lead at the John Deere Classic on the PGA Tour.

Poston, 29, has only won once on the PGA Tour in his career after turning professional in 2015. A significantly weakened field will present an opportunity for him to add a second victory.

The highest-ranked player who entered the event, Daniel Berger, was forced to withdraw due to a back injury. It’s unknown how long he will be out for. Davis Riley, Steve Stricker and Jason Day also withdrew.

Nicknamed The Postman, the American certainly delivered at TPC Deere Run on a low scoring day that was highlighted by an eagle at No.2 Poston added three other birdies on his front nine.

Poston also made birdies at 13, 14, 17 and 18 in his bogey-free round to hold, at the time of writing, a three-stroke lead over Vaughn Taylor.

Three players are grouped behind Taylor and Poston. They are Ricky Barnes, Denny McCarthy and Chris Naegel. Taylor Moore, Chesson Hadley, Scott Stallings, Mark Hubbard, Adam Svensson and Curtis Thompson round off the top-10 after 18 holes.

Poston said: “Yeah, I mean, it's obviously why you practice and why you work as hard as you do on your game. Any time you can have those rounds where you really get it going low and mistake-free, bogey-free is a bonus.

“It's why you work at it and why you practice the way we do.”

Elsewhere, Morgan Hoffmann, playing on a sponsor exemption, was involved in one of the most bizarre incidents of the day in Illinois.

At the par-3 16th, Hoffmann’s ball was plugged in a greenside bunker, leaving him with a nigh on impossible up and down.

Hoffmann decided to try and hit the ball really hard in the hopes of splashing it out, but the ball cannoned off his cap.

He thought he was going to be dealt a penalty but the Rules of Golf permit this. The rules changed in 2019. Hoffmann shot 1-over par on day one.

Hoffmann was diagnosed with facioscapulohumeral muscular dystrophy in 2017 and is now trying to earn his full playing rights for next season.

Thursday marked the day the second LIV Golf Invitational series got underway in the United States at Pumpkin Ridge Golf Club in Portland.

Next page: JT wants LIV Golf players to admit it's all about the money