Tiger Woods has got The 150th Open Championship on his mind and it appears he wants to make gains on his game both on and off the golf course... 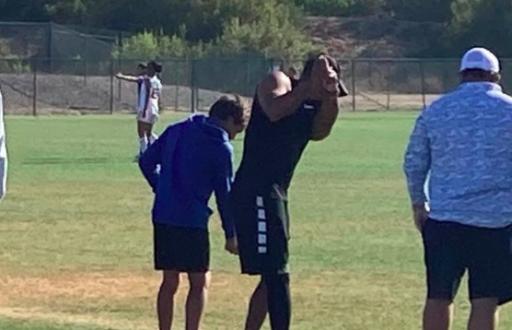 Sometimes, professional golfers from the PGA Tour prove they are one of us and Tiger Woods did exactly that when he was pictured watching a soccer match.

We have all been caught taking shadow practice swings in public settings and the 15-time major champion is no different. As you can see in the image below, Woods has got nothing but golf on his mind.

In this latest public outing, Woods has got a protective sleeve on his right leg which was missing when he was pictured reportedly watching his son Charlie at a junior golf event seven days ago.

Golf fans saw the true damage to his right leg and the extent of his injuries from the car crash in February 2021. Having seen this image, the threat of leg amputation must have been very real while Woods was in the hospital.

The 46-year-old doesn't just have golf on his mind, but specifically, the home of golf. He is set to tee it up in The 150th Open Championship at St Andrews in July.

Woods wisely skipped the labouring challenge that The Country Club would've thrown at him at the US Open, having withdrawn from the US PGA Championship in May.

Woods is meticulously choosing his schedule with the event and style of course being key considerations. He has won two of his three Claret Jugs at St Andrews and it is certainly a venue close to his heart.

There is something still in there with Woods as he showed in the first round of The Masters in April. He shot a 1-under-par 71 on Thursday, but he visibly tired as the week grew on.

St Andrews will likely present a more favourable Open for Woods to play in, compared to the tough weeks we have previously seen inflicted on the players from the likes of Carnoustie and Muirfield.