Brooks Koepka appears to have offered his response to Bryson DeChambeau's $100million switch to LIV Golf. 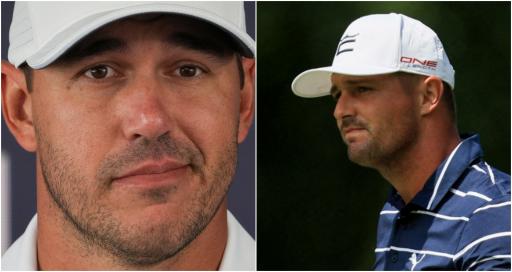 Brooks Koepka appears to have issued his one and likely only response to Bryson DeChambeau's decision to play in the Saudi-backed golf league.

Yesterday afternoon DeChambeau's agent confirmed that his "innovator" client decided to play in the second LIV Golf event in Portland.

DeChambeau has not resigned his PGA Tour membership, which means that he is now likely to face disciplinary action.

It has been reported that as soon as the LIVers put a tee in the ground at Centurion Club on 9 June, sanctions will be announced.

One person watching this drama from afar is Koepka. The newly-married man has pledged his loyalty to the PGA Tour.

Though if we're being truthful, that doesn't really mean much considering the wild events that have unfolded in the golf world recently.

No sooner had DeChambeau been announced as signing up with Phil Mickelson, Koepka had a response.

He posted the following Tweet below. He left it a while, then posted a link to another article. Though we can read between the lines, Brooksy.

It has also been reported that DeChambeau is being paid a whopping $100million for the switch.

Koepka was involved in one of the more hilarious (and tedious?!) rivalries with the 2020 U.S. Open champion last season.

It culminated in the pair going toe-to-toe at The Match in Las Vegas, which Koepka won.

He's had digs at the LIV players before. When Mickelson described the PGA Tour as "obnoxiously" greedy, Koepka didn't hold back.

"Don't know if I'd be using the word greedy if I were Phil," wrote Koepka. He ultimately refused to elaborate.

And he'll likely not say too much about DeChambeau's sudden deparature for the riches of the new golf league.

Rory McIlroy and Justin Thomas spoke about the unfolding drama yesterday before the RBC Canadian Open.

Thomas described players switching as "a bummer", whilst McIlroy claimed purely money-based decisions don't always have a tendency of working out.