Jon Rahm struck an ESPN anchor in the face at the PGA Championship after a stray tee shot at Southern Hills. 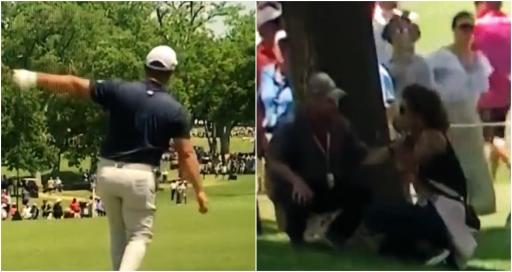 Jon Rahm's wild drive hit an ESPN anchor directly in the face and left her covered in blood, it has been reported.

The stray drive from the former World No.1 and 2021 U.S. Open champion struck Sage Steel during in the opening round of the PGA Championship.

It happened on the third hole at Southern Hills Country Club. Rahm did not speak to the media after his first round so he may not have known.

According to the New York Post, Sage was taken to hospital and looked over before given the all clear to return home.

Rahm can be seen in the clip yelling "fore" and using his Callaway driver to indicate just how far left he had hooked his tee shot.

Gofl writer Geoff Shackleford reported that a witness told him that she fell to the ground holding her nose, mouth or chin area with bloody hands.

During Friday's second round, Cameron Smith accidentally struck Aaron Wise with an errant tee shot when playing the second hole in Oklahoma.

Wise fell to the ground and the next thing he knew he had ringing in his ears, he said, but after being looked over he carried on. He was a little sore.

Even Harold Varner III appeared to hit a fan with a rogue shot. That fan got in contact with the Saudi International winner to say he headbutted the ball into a better lie.

Smith later told the media he was absolutely none the wiser what had happened when his 300-yard drive delivered a "glancing blow" to Wise, 25.

Wise's playing partner, Joel Dahmen, described the noise of the impact as so loud that even spectators heard it.

The golf ball ended up rocketing an extra 40 or 50 yards up the fairway, he told the media.

Went back and found the video of Sage Steele getting hit in the face by a Jon Rahm tee shot yesterday, first reported by @GeoffShac

Good lord that had to hurt. Hope Sage is OK pic.twitter.com/x0HxjSBgK0