Rory McIlroy and Justin Thomas discuss what winning on the PGA Tour this week would signify after the first LIV Golf event. 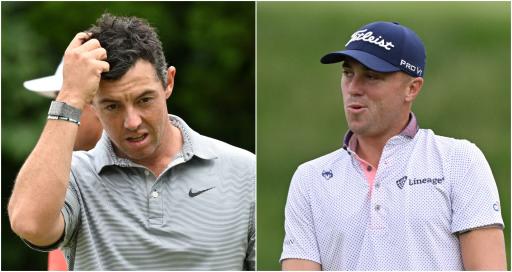 Both Rory McIlroy and Justin Thomas are in contention heading into the final round of the RBC Canadian Open in perhaps a defining week for the future of professional golf.

Related: How much they all won at first LIV golf event

Thomas, 28, and Sam Burns are lurking two strokes behind. Burns is looking for his fifth PGA Tour win and his third win of the season after claiming the Valspar and the Charles Schwab Challenge.

Clearly, it has been a big week in the landscape of professional golf. PGA Tour members who were in the Saudi-backed LIV Golf field at Centurion Club in St. Albans are now currently suspended.

Future members who decided to play in the mega money rival series will face the same disciplinary action, PGA Tour commissioner Jay Monahan said this week in a memo to players.

“These players have made their choice for their own financial-based reasons. But they can’t demand the same PGA Tour membership benefits, considerations and platforms as you,” he wrote.

McIlroy has been outspoken on this subject since as far back as 2014 when the idea of a golf super league attracting the game’s biggest stars was touted.

Even Thomas, the 2022 US PGA champion, has welcomed the PGA Tour suspending players who have moved over without resigning their membership.

Although earlier this week he admitted that he doesn’t think any less of Dustin Johnson for his decision to part ways with the PGA Tour.

But he was asked whether winning this week would be of any added significance.

“Obviously with everything going on -- this week was going to be very special regardless -- but I think it just, I mean it makes, I mean, without sounding cheesy, it makes me pretty happy inside seeing this,” he said.

“There's no other place I would want to be playing and it's just, obviously with a tournament like this and the history that it has and how long it's been played, had a lot of great past champions and venues and drama.

“And it looks like it has a potential tomorrow to produce a little bit more of that and create some more history.”

McIlroy has been outspoken about this subject since the initial idea for a super league attracting the game’s biggest stars was initially touted. He called it a money grab back then.

Although in recent weeks and months the Northern Irishman has admitted he understood why some players have decided to grasp the opportunity.

He played golf purely for money when he turned professional, he has said. Over the years, this has changed for him, he told reporters after DJ was officially confirmed as the first big-name LIV player.

When asked the same question as Thomas, he struck a slightly different tone. Although he pointed to the atmosphere being different.

“I don't even think personally for me like it would be great to win, but I think what a success this tournament is anyway.

“You look at it out there today. I mean it's certainly the best atmosphere of any golf tournament going on this week. Yeah, the crowd support is incredible and yeah, I'm pretty sure what's going to happen over the final 18 holes here is going to be more entertaining than what other golf was played this week anywhere else.”