Golf writer after exposing Phil Mickelson: "I'm not dancing on his grave" 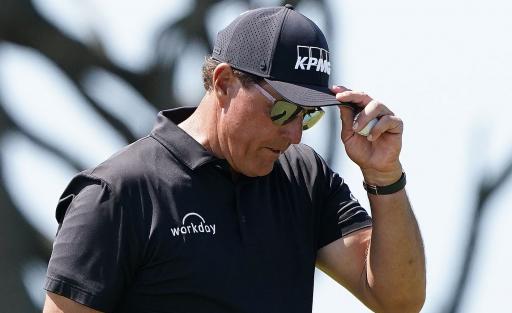 The golf biographer who exposed Phil Mickelson's controversial comments surrounding the Saudi Golf League and PGA Tour admits he  is "stunned" at how quickly the majority of Mickelson's sponsors "jumped ship".

Alan Shipnuck, who has been writing a new book titled 'Phil - The Rip-Roaring (and Unauthorized!) Biography of Golf's Most Colorful Superstar', last month revealed some of the remarks Mickelson made during their conversation back in November.

Mickelson says they were "off record", while Shipnuck disagrees.

Related: Alan Shipnuck admits he has "some incredibly damaging information about Phil Mickelson"

The comments seriously backfired for Mickelson and he was instantly dropped by three of his major sponsors including Workday, KPMG and Heineken / Amstel, while Callaway, where he has been since 2004, has decided to "pause" its relationship.

But the loss of three major sponsorships for golf's oldest champion in recent days has shocked Shipnuck, who admits he is "not by any means dancing on Mickelson's grave" in the aftermath of his book excerpt being made public.

Related: Here's what Mickelson messaged Shipnuck when he saw the excerpt was made public

One of Shipnuck's followers messaged him as part of his latest instalment of #AskAlan questions on the Fire Pit Collective.

"Do you feel any guilt that Phil's sponsors are dropping him," quizzed one reader.

That’s not the right word, but I’m certainly stunned at how quickly they all jumped ship. Part of that is a measure of the Saudis’ toxicity. As I reported in last week’s #Ask, Workday had already decided not to renew Mickelson’s contract even before my book excerpt dropped. Mickelson has become increasingly strident and outspoken; his “obnoxious greed” comments to John Huggan at the Saudi International certainly did not play well in the halls of KPMG and Callaway, which have relationships with the Tour that are much bigger than just one endorser, even if he’s a Hall of Famer.

At the same time, Nike stood by Tiger Woods as he went through the tawdriest sex scandal of the Internet age, and then again after his addled mugshot and dash-cam video went around the world. (Of course, Woods’s problems, including with women, are rooted in addiction, which makes him more relatable and sympathetic than a rich dude scheming to get even richer.) Mickelson’s sponsors had been remarkably resilient through his myriad controversies. I mean, the guy was mixed up in a nasty insider trading case and KPMG, a financial services company (!), still kept him on the payroll. He savaged a proud champion in Tom Watson in front of the world at Gleneagles and no sponsors blinked. Mickelson tarnished himself and the national championship by playing tennis on the 13th green at Shinnecock Hills and yet the checks from corporate America kept rolling in. Yes, his comments to me made Mickelson sound greedy and conniving and tone-deaf and morally bankrupt, but he had previously wiggled out of so many jams it never occurred to me he wouldn’t do it again.

It has certainly been hard to watch his downward spiral. I’m not by any means dancing on Mickelson’s grave. This time of reflection evokes Dustin Johnson’s leave of absence in 2014; DJ came back a better player and person, and I wish the same for Mickelson. It has been uncomfortable for me to be at the center of this story. I knew there would be blowback, but my job is to enlighten golf fans. The professional game is at a crucial crossroads; all of this time, the key questions surrounding the Saudi seduction have been, What does Phil want? What is in his heart and his head? It was a mystery to everyone but me. With the SGL on the verge of being publicly announced, it didn’t feel right to bury Mickelson’s true feelings in the book for three more months, Woodward-style. So I feel no guilt. It is not my job to do Mickelson’s bidding, or the PGA Tour’s, or Saudi Arabia’s. My only duty is to tell it like it is.

Mickelson has decided to now take some time away from the sport as he looks to contemplate his words and actions in recent weeks.

It remains to be seen whether or not he will tee it up at The Masters in early April.

A return for both Phil and Tiger at the same time? Probably not, but we can all dream.

Next Page: "Phil Mickelson will be back", admits Rory McIlroy