European golf legend Tony Jacklin believes that if Phil Mickelson's aim was to improve the PGA Tour by involving the Saudis, then there is little wrong with that. 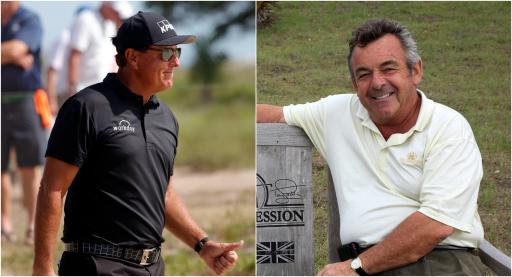 Speaking exclusively to GolfMagic, Jacklin questioned if players from the PGA Tour would need the riches offered from the Middle East, pointing out that Rory McIlroy is reportedly worth $150 million anyway.

However, the 77-year-old saw sense in Mickelson's approach if his sole aim was to help the PGA Tour "pick up some slack" and iron out areas for improvement.

Since we spoke to Jacklin, Mickelson has released a statement apologising to those he has negatively impacted from his "off-the-record" comments to Alan Shipnuck and has ended his partnership with KPMG.

"The Saudi thing has some attractive parts to it and obviously the money is one," said Jacklin, speaking in association with BoyleSports latest golf betting.

"I’m told that they’re looking at wanting to change the television and bring everything down into a four-hour period where all bases are loaded and you’ve got a team element involved and a match play element.

"It’s not really unfolded yet and there’s a lot of media just clasping straws, telling their story. Certainly, one thing that has come about is the tour (PGA Tour) making extra efforts and who knows, maybe that was the idea in the first place.

"Phil Mickelson said it was all about having leverage to get the tour to do more with what they’ve got. Phil is a pal of mine and he’s somebody I respect and if he was just trying to get the tour to pick up some of the slack, as he saw it, I don’t see anything wrong with that.

"What the tour have done since the announcement (SGL emerging) is make a big effort, like putting $40 million into a media fund (PIP).

"They’ve upped the ante with the FedEx Cup for years to come, injecting more money into the Korn Ferry Tour too. They’re doing various things so there was obviously some slack there that they were sitting on."

Last night, Mickelson dramatically released a statement in which he apologised for his choice of words and he described LIV Golf Investments and other groups working on the Saudi golf league as "visionaries."

The six-time major champion maintained that golf needs change. However, Shipnuck has responded to say that the comments Mickelson made were very much on the record.

Jacklin, a winner of The Open Championship and the US Open, believes we haven't heard the last of the Saudi golf tour, however, he hopes this development doesn't negatively affect the Ryder Cup.

The Englishman has captained Team Europe four times and played in the event eight times, including when it was the Britain and Northern Ireland team. There are rumours which suggest players who join the Saudi golf league will be banned from the Ryder Cup.

"I just hope it doesn’t affect the Ryder Cup. Apart from Tom Weiskopf in 1977, everybody that has been picked for a Ryder Cup team, for Europe or America, has turned up to play," Jacklin continued.

"I can tell you as a four-time captain that you need to have the best players available to you because it is a serious deal.

"All of a sudden, if there are certain players that you can’t have that deserve to be in there, it will turn into an exhibition match.

"That’s not what anybody wants and we’ve had so many nail-biting finishes. So much emotion and so many tears shed over the last 40 years or so and it would be sad to see all that end."

NEXT PAGE: HERE'S WHAT PHIL MICKELSON MESSAGED SHIPNUCK WHEN THE SHOCKING EXCERPT DROPPED